Do you buckle up your kids? New research shows one in four parents don’t

Do you buckle up your kids? New research shows one in four parents don’t 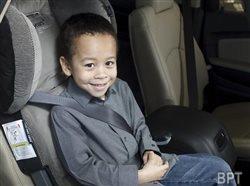 The “Buckle Up: Every Ride, Every Time” study released by Safe Kids Worldwide, funded as part of a $ 2 million grant from the General Motors Foundation, surveyed more than 1,000 parents, focusing on families with kids ages 10 and younger to learn more about their habits when buckling up their kids. Surprisingly the research found that younger, more educated, and affluent parents are more likely to take a risk and ride with their kids unbuckled in a car.

“The number of children dying in car crashes has declined by 58 percent since 1987 but this research shows that the trend toward buckling up kids on every ride could be heading in the wrong direction,” says Kate Carr, president and CEO of Safe Kids Worldwide. “We want to remind all parents that it’s important to buckle up their kids every time, on every ride.”

Motor vehicle crashes are the leading cause of death to children. According to the National Highway Traffic Safety Administration (NHTSA), in 2011, 679 children ages 12 and under died in motor vehicle crashes, a third of which were riding without a child safety seat or seat belt that could have saved their lives. In addition, older children are more often unrestrained in fatal car crashes compared to younger children.

When properly used, car seats can reduce the risk of death by as much as 71 percent, according to the National Highway Traffic Safety Administration. The “Buckle Up” study showed that while some parents and caregivers may be diligent about buckling kids up in most cases, they sometimes bend the rules in certain circumstances, including during driving a short distance, during overnight travel, or as a “reward” for a child.

“One-third of children who die in car crashes are not buckled up,” says Carr. “It only takes one time riding in a vehicle without buckling up for a life to be changed forever. There is no reason important enough to take the risk.”

The findings also showed some disturbing trends about what type of parents are taking the most risks. For example, 27 percent of younger parents (ages 18-29) said it would be acceptable to ride with a child unbuckled for short rides compared to 19 percent of older parents. More affluent parents and parents with graduate degrees were also more likely to find it acceptable to not buckle up their kids.

Safe Kids Worldwide encourages all parents and caregivers to follow these tips to keep kids safe in vehicles:

1. Buckle up on every ride, every time.

2. Talk to the adults who will be driving your kids about buckling them up.

3. Check that the car seat, booster seat or seat belt fits your child and is used properly.

If you’re unsure or are having trouble installing your car seat, download a car seat checklist or attend a car seat inspection event where a nationally certified child passenger safety technician can help or even double check your work. Parents and caregivers can visit www.safekids.org to locate an event in their community.