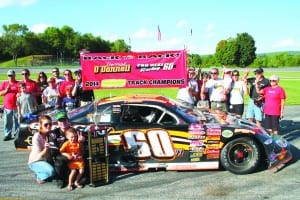 Derrick O’Donnell, of North Haverhill, N.H., claimed his second straight Thunder Late Model “King of the Road” title at the conclusion of the 36th annual Coca-Cola Labor Day Classic 200 at Thunder Road on Monday, September 1. Second place point man Nick Sweet of Barre did all he could to snatch the title away from O’Donnell by claiming his second career Labor Day Classic victory, but O’Donnell’s seventh consecutive podium finish in second was enough to earn him the title.

The event, originally scheduled for Sunday, August 31, was pushed back to Labor Day Monday due to rain. When the feature event finally went green, the defending track champion and point leader took the green flag 18th on the 32-car field, while Sweet started 14th and trailed in the standings by 16 points. At the start of the event, Sweet rocketed to the front of the field and settled in to the third spot by lap 41. O’Donnell patiently worked his way through the field and ran just inside the top ten through the first 140 laps

Jason Allen led early in the event before relinquishing the lead to Brett Gervais on lap 34. Gervais would lead until Sweet moved into the top spot on lap 92. Riding in the lead, mathematically Sweet had done enough to claim the title as O’Donnell was still just inside the top ten. After five of the 10 cautions in the 200 lap event between laps 141 and 155, O’Donnell had worked his way to fourth and back atop the title hunt.

Sweet was locked into a fierce battle for the win with Dave Pembroke until Pembroke flew off the top of turns one and two out of the lead on lap 144. Sweet then had to fend of Jason Corliss over the remaining 50 laps. The duo swapped the lead several times, but Sweet got the advantage with 30 laps to go. O’Donnell worked his way by Corliss and restarted outside of Sweet for the final restart with just 13 laps to go. Sweet got the advantage and cruised to the win.

O’Donnell held on to second ahead of Cody Blake in third. Trampas Demers and Brooks Clark completed the top five. Corliss fell back to sixth ahead of Chip Grenier, Joey M. Laquerre, Dave Pembroke and John Donahue.

The Coca-Cola Labor Day Classic 200 saw 32 cars take the green flag in the final Thunder Late Model point counting event of 2014 and the third of four events in the Vermont State Late Model Championship Series. The Labor Day Classic was completed with 10 cautions in one hour and twenty-eight minutes. There were 12 lead changes among five drivers.

The fourth and final VT State Late Model Championship event will be on Sunday, September 14 at Devil’s Bowl Speedway in West Haven, Vt. Sweet continues to lead the series as he claimed his second win in three events.