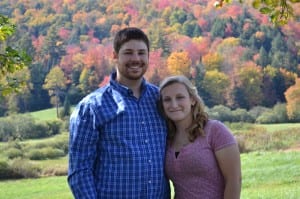 Barry and Andrea Richardson of Worcester, VT are delighted to announce the engagement of their son Cory E. Richardson to Jennifer L. Delaney of Newport, NH.

The future groom graduated from U-32 High School in 2009 and Lincoln Technical Institute’s Diesel Mechanics Program in East Windsor, CT in 2012. He is employed as a diesel technician at Bellavance Trucking in Barre.

The future bride is the daughter of Angela McGuire Landry of Newport, NH and Michael Delaney of Charlestown, NH. She graduated from Newport Middle-High School, Newport, NH in 2009 and attended the veterinary technology program at Vermont Technical College 2010-2011. She is currently enrolled in Community College of Vermont and is employed as the Shelter Manager at Central Vermont Humane Society in East Montpelier.

Frozen. Not the Movie... Just Frozen

Frozen. Not the Movie... Just Frozen