Dark Chocolate with a Liberal Amount of Sea Salt

Dark Chocolate with a Liberal Amount of Sea Salt 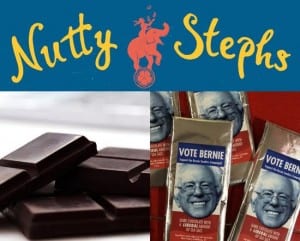 By Aaron Retherford
A little salty is a pretty good way to describe Vermont Senator Bernie Sanders’ personality at times. So when Nutty Steph’s founder Jaquelyn Rieke decided to create a chocolate bar in order to support his presidential campaign, she fittingly chose one of the more popular flavor combinations – dark chocolate and sea salt.

Vote Bernie Bars have been a big hit since they hit shelves in mid-December. So far, Rieke says about 8,000 bars have been sold and they sell out each day.

The bars are a fundraising vehicle for those who want to help contribute to the campaign, but might lack the financial resources to give as much as they would like. A case of 12 bars costs $39. The idea is to sell each bar for $6 to friends, family members, coworkers, or whomever you want. That leaves you with an extra $33 that can be donated to the campaign. It also gets Sanders’ face out in the public on the wrappers and TV commercials for the bars.

Rieke said she was personally skeptical of the Bernie campaign at first. She felt it was a pipe dream similar to how so many other Americans think. But when she watched the grassroots movement grow and saw how much money the Sanders campaign was raising, she realized he could become president and she was inspired to incorporate the campaign into her business.

And now that she’s fully on board, it means selling up to 500 Vote Bernie Bars a day, donating to the campaign weekly, and holding phone banking events at Nutty Steph’s.

“I’m just a big fan of having an honest politician run our country,” Rieke said. “Being a Vermont food company and with such an excellent Vermont candidate, we wanted to do what we could to help spread the message. Since everybody loves chocolate, it’s an easy way to get people on Bernie’s side.”

This passion for the Sanders campaign is evident throughout the company, all the way to the “packaging gals”, who hand wrap each bar. Rieke said one member of the packing crew in particular, Grace, who has Down syndrome and has worked at Nutty Steph’s for over 2 years, is excited to help Sanders.

“She comes in everyday and says, ‘OK Bernie, we’re going to wrap some more bars for you.’ It’s really cool,” Rieke said.

If you want to purchase Vote Bernie Bars, head on down to Nutty Steph’s, located at 961 US-2 in Middlesex.

Guest Opinion: Reflections On Vermont’s 225th Birthday as a State

Guest Opinion: Reflections On Vermont’s 225th Birthday as a State