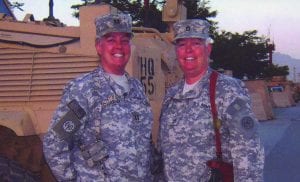 Lieutenant Colonel (Retired) Lynn Currier and Master Sergeant Lisa Currier twin daughters of Elizabeth C. (Tucker) Melvin, Barre, Vermont, the late Donald K. Currier (deceased) and step father Eldon J. Melvin (deceased) have been members of the Vermont and New York Army National Guard for over 33 years each. Lynn and Lisa are 1981 graduates of Spaulding High School, they enlisted into the Army National Guard together in 1986.

Beginning in 1986, the two sisters, who are both Troy, N.Y. residents, have spent more than three decades sharing service and experiences. It turned out to be an advertisement for the Vermont Army National Guard, highlighting some of the education benefits that were offered. Lisa explained that she was able to talk her sister into joining with her, ultimately the Army Reserves, rather than looking into the state police.

Both women enlisted together on February 3, 1986 on the buddy system, under that system, Lynn explained, the two sisters were able to go to basic training and advanced individual training together. Six month later coming home to Vermont, they went right to work full-time at Camp Johnson in Colchester.

Over the course of the next three years, Lynn advanced her career in the New York National Guard while her sister stayed behind in Vermont. Lisa, who had transitioned from working for the Vermont National Guard to working for IBM, wouldn’t stay behind for long.

“She kept saying, come over, come over,” Lisa recalled. “I was working like 12 hour shifts and it was just crazy. I woke up one Sunday morning and decided, I’m tired of this.”

Three years after Lynn made her way to New York, Lisa put in her resignation to IBM and left, moving in with her sister. Lisa explained that within a couple of weeks she was then able to find a job at the New York Army National Guard headquarters.

The Currier sisters agreed that one of the most significant changes they’ve seen during their 34 year careers was an increase in women joining the National Guard. They’ve also been pleased to see more and more women being selected for leadership positions.

Those opportunities, along with the full- time employment and benefits afforded to them, the sisters explained there was no reason to leave the Army National Guard. With more women joining the military, the Army needed to make changes. Lisa said she experienced first-hand what she considers to be one of the most significant changes.

While preparing to mobilize for deployment to Iraq in 2004 with the 42nd Infantry Division, Lisa who is a breast cancer survivor, discovered the Army didn’t have guidelines for how to treat women who had once had cancer. There were regulations on how long men had to be free from the various types of cancers that can develop in men, but there were no regulations covering cancers which effect only women, Lisa said.

During mobilization at Fort Drum, the staff decided to insist on a six month period of being cancer free before Lisa could proceed with mobilization. There were relapses that reset the six month waiting period, and as a result Lisa spent her 18 month deployment at Fort Drum.

Since then, medical policies have changed to accommodate women as well, Lisa said.

While the Curriers both started as enlisted Soldiers in 1986, Lynn decided she wanted to take her military career to another level and become an officer after reaching the rank of staff sergeant.

“I always wanted to be more assertive and more in control of things,” said Lynn. “I felt the only way that was going to happen was to be an officer.” “She just wants to be the hot dog,” laughed Lisa. As an officer, Lynn served as a military police officer which was an aspiration of hers before joining the National Guard.

In 2008, the Currier sisters found themselves deploying with the HQ’s 27th Infantry Brigade Combat Team to Afghanistan, in support of Operation Enduring Freedom from January 2008 to December 2008.

Lynn served as the Deputy Provost Marshal (2nd in command of the Police Force) Camp Phoenix, Kabul, Afghanistan. Lisa served in Mazar-i-sharif as a Senior Logistics Non-Commissioned Officer (NCO) in charge of over 10 million dollars’ worth of equipment located all over the region.

“We did deploy together, but they separated us after three or four months,” said Lisa. “That was the big thing, they didn’t want them together on the same base.” “In case there was an attack,” added Lynn.

They said that Lynn remained in Kabul, while Lisa was sent 500 miles away to Mazar-i-Sharif. Initially however, Lynn arrived in country several days before Lisa and was waiting to offer her a lift to the astonishment of other, higher ranking service members.

“When I flew in, I think she knew I was coming,” said Lisa.

“I flew in with people that were a lot higher ranking than me,” said Lisa with a laugh, “she pulls up with the Gator and I throw all my stuff in it and we take off, while everyone else has to carry their stuff.”

The year passed, with those initial few months spent with Lisa sleeping on her sister’s floor on a couple sleeping mats, Lynn had half a Conex box, roughly 10ft. by 15ft. Both Soldiers returned safely home to their families.

Now as they prepare to retire, looking back at their fondest memories of their military careers, Lisa said for her it is of all the wonderful people they have been able to meet.

“It’s like a family,” Lynn added. But it was being a soldier that meant the most to her. “When I had to take my uniform off, let me tell you,” Lynn started before Lisa emphasized that her sister was upset for weeks afterwards.

After all of the years spent in uniform together, they explained that they still travel together, have recently bought a house together, and remain as close as ever.

“If I had the same chance again, I’d do the 34 years again,” said Lisa. “When I first enlisted I never thought I’d make three years. And now these years have flown by.”

Lynn’s retirement came on June 21, 2019, she has moved onto working for the Active Army as a civilian as the Education Services Specialist (ESS) in the US Army Recruiting Command at the Watervliet Arsenal just outside of Albany, NY.

Lisa will retire November 30, 2019 where she will return to the New York Army National Guard State Headquarters building and work as a Contractor in the Department of Logistics (DOL).

Though they have both retired from the Army, they can’t seem to get the mind set and “esprit de corps” out.