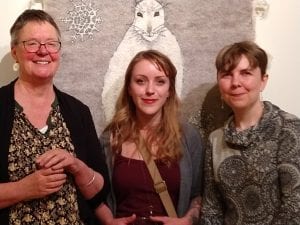 Artists Jess Polanshek, Kristin Richland, and Amanda Weisenfeld are currently displaying their work in “MUSE,” an exhibit at the Highland Center for the Arts in Greensboro, Vermont. The show, which features art full of forests and animals, runs from March 3rd to May 28. The three artists came together to do the show thanks to Vanessa Compton and Anna Weisenfeld, co-curators of the Miller’s Thumb Gallery in Greensboro and now the Highland Art Center. Below they chat a bit about their work.

Can you tell me a little bit about the pieces featured in MUSE? Which are your favorite? What inspired them? 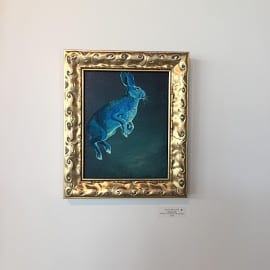 I think my current favorite in the show right now is “A Great andGlowing Portal.” It’s currently the last drawing I did for this tale I’ve called “the Guides,” the unfinished story is about a bear on an unnamed quest, guided along by various creatures or creature spirits. But I love different pieces on different days.

The world created in “Watership Down” (Richard Adams) had a strong effect on me at age ten and never really let go. My parents loved bears in artwork, so we always had that motif around the house, and I absolutely adored Maurice Sendak’s “Little Bear” character. When I draw these creatures, I want to capture a mix of wisdom, pathos and strength. I always find it easier to convey a human emotion using an animal!

In a lot of your pieces, the characters seem to be either waiting or searching. Why do you think this theme weaves throughout your work?

The theme of waiting has been with me for a long time, and as I’ve never been quite sure where it sprang from, I’d say it’s fairly unconscious. I do know that since childhood I’ve often been quite happy to sit and observe and take in everything around me. There’s a feeling of potential that I enjoy playing with sometimes, and since I have a bit of a dark streak in my work, an ominous vibe does tend to creep in to those pieces.

I read that your work is influenced by your international travel; how so? 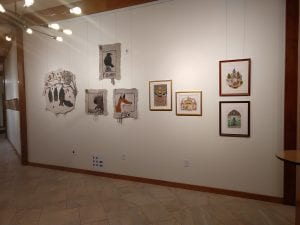 I spent a little time traveling to major cities in Western Europe and was greatly influenced by the architecture and patterns I stumbled upon. It taught me how to observe my surroundings and combine elements of buildings, nature, traditional patterning – whatever jumps out as visually fascinating. I think artists can learn from any form of travel – new experiences and visuals have a way of seeping into what we create.

How do you start a piece? Do you have a plan for it, or does it evolve as you go?

Most pieces start with a vague idea and two-minute sketch that I then transfer to a larger piece of paper (usually 11”x14”). Starting with light pencil and then diving in with pen that I layer and layer until I like the textures and depth. Then I start painting with many thin layers of watercolor.

Do you have characters that continue their stories from one piece to the next? Or does each feel like its own compact narrative?

Each piece has its own narrative, which I don’t generally recognize when working on the piece. Most works take on their own stories after they’ve been finished for a while. I also love hearing what stories crop up for viewers, as they’re generally a surprise to me.

In what way have your pieces surprised you?

I’m always surprised by the range of folks that can appreciate my work and I feel that a main factor that unites them is a deep love of animals. I’m so grateful that I can put my own spin on such a beloved, universal subject matter and still have people dig it.

What kind of process is involved in felting? How did you get into it? Did you grow up with sheep?

I didn’t grow up with sheep and I’ve never owned them. I like to buy fleeces from Vermont sheep owners. Felting involves a lot of physical work, especially when making a rug. There is washing all the dirty wool and lots of carding before I even get to laying down the design. Then I wet felt with soap and water and spend hours of rolling and pounding before I am done.

By functional art I mean items that can be used. I like to make felt rugs, pillows, wallhangings, lighting, placemats.
How long does it take for you to do a piece? I imagine it must be planned out rather than an exploratory process? It depends on what I’m making. A rug takes weeks. A wall-hanging takes days. I do make an initial overall plan, but that changes as I go along. Once I start wet felting, I can’t change anything. 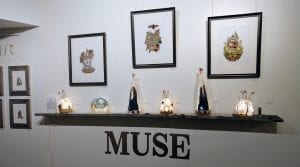