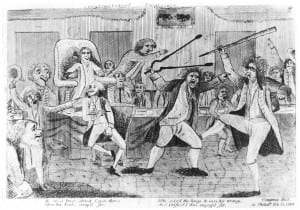 The story of Matthew Lyon focused national political attention on the newborn state of Vermont and offers a good illustration of the intensity of political strife in the 1790s.

Lyon came to this country from Ireland as a “redemptioner,” meaning the cost of passage was paid by some American employer in return for a contracted period of work, usually seven years. He settled in Litchfield, Connecticut, the home of many early Vermont settlers. He eventually married a cousin of Ethan Allen. (Litchfield County would give Vermont four governors, seven congressmen, seven Supreme Court justices, and three United States senators.)

Like many of his friends, Lyon began to buy land at bargain prices in the north. He chose a tract of land in Wallingford, which at the time consisted of only “a few rough log huts scattered in the surrounding woods.” During the Revolution, Lyon joined the Green Mountain Boys. He participated in the capture of Fort Ticonderoga in 1775 and the Battle of Hubbardton in 1777.

Lyon’s first wife died shortly after the war, and he married one of Governor Chittenden’s daughters. Shortly thereafter, Lyon founded the town of Fair Haven, establishing the first store, the first hotel, a paper mill, gristmill, two forges, an iron furnace, and a newspaper. He twice represented Fair Haven in the General Assembly.

Lyon was elected to Congress in 1796. He gained national attention by getting into a fight with Congressman Griswold of Connecticut. Representative Griswold suggested to Lyon that he had been less than patriotic during the Revolutionary War and Lyon spit into his face.

They dueled on the floor of Congress, one with a poker and the other with fire tongs. Congress attempted to expel Lyon, but a two-thirds vote was not achieved. In 1798, Lyon wrote a letter criticizing President Adams, calling him a “pompous fool.” Congress had just enacted the alien and sedition laws. He was convicted of sedition in a Rutland court, put into jail in Vergennes, and fined $1,000. While in jail, he was re-elected to Congress.

A few years later, he moved to Kentucky, became a merchant and ship builder, and established a printing press. He was beset by financial difficulties and lost virtually all his property. In 1820, he was appointed as an Indian agent in the territory of Arkansas. In a very short time, he was elected to Congress, but shortly thereafter, he died before he could take his seat.

According to a biographical account by Vrest Orton, Lyon was a “remarkable man who was a real opportunist and could have risen probably in no other country but America. There was no question that he was a considerable force in his day, for he founded two towns himself, helped found three states, and valiantly maintained the Bill of Rights.”