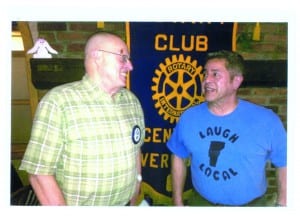 L-R: Art Farnum and Bob Thomas ham it up at a meeting of the Central Vermont Rotary Club.

Suddenly people are laughing more – sometimes hysterically, sometimes subtly – not only because it is good for them but because there are more improv individuals and groups than ever before.

Previous to recent years, Vermonters had to travel to bigger metropolitan areas or wait for big name comedians who might be touring in Burlington, West Lebanon, etc.

But according to “Laugh Local” improv comedian Bob Thomas, who recently addressed the Central Vermont Rotary Club on the subject of the upswing of comedy in Central Vermont as well as Vermont in general, there are quite a few very good local-brand comedians standing up and stealing the show.

Thomas, like most local comedians, has a regular day job and participates in comedy nights or weekends at different venues in this area.

“It’s something that gets inside of you and once you have it, you’re hooked,” notes Thomas, a “class clown” who eventually took a formal stand-up comedy class through the Vermont Comedy Club. Kathleen Krantz was his mentor.

As the saying goes, “laughter is the best medicine,” or, as the late David Brenner put it “laughter doesn’t take away what’s bad, but it helps get you through it.”

Thomas notes that humor is not only infectious, but very healthy for everyone, as well.

“Laughter is best when shared. It binds people together and increases happiness,” says Thomas, a farm boy in a family of seven. It also triggers healthy physical changes and strengthens your immune system, boosts your energy, diminishes pain and protects you from the damaging effects of stress and conflict. Plus it’s fun, free and easy to use.”

“Who wouldn’t want that medicine?” quips Thomas, adding that laughter causes your pulse and blood pressure go up and your breathing to speed up, sending more oxygen to your tissues.

“Laughter and movement (like waving your arms) boosts your heart rate almost like a mild workout, but is a lot less sweaty. And research has shown that humor may raise the level of infection –fighting antibodies. Comedy helps the body maintain proper blood sugar levels.”

Finally, Thomas notes that humor helps in the release of endorphins, the body’s natural feel-good chemicals, and can even temporarily relieve pain.

All these “pluses” of comedy/humor are good for both the “jokester” and audience, as Thomas discovered when he graduated from stand-up class.

“I got word that Espresso Bueno, a coffee shop in Barre, was looking to start a comedy open mike and soon I put together ‘Laugh Local VT,’ my comedy production enterprise. After much success there, I took the show to Montpelier’s American Legion Post 3 on the first Friday of every month.”

Thomas points out that a fellow local comedian has an open mike at the new Espresso Bueno in Barre, also on a Friday night.

“The host also has a ‘showcase’ of 5-8 comedians and is a pay for view event.”

Sweet Melissa’s in Montpelier, formerly the Langdon Street Café, started a showcase monthly event, reports Thomas. “Burlington also has had an explosion on the comedy scene. Almost any day of the week you can find some kind of comedy show or open mike.

“Remember this: If you can unlock your sense of humor, you’ll likely unlock others,” believes Thomas.