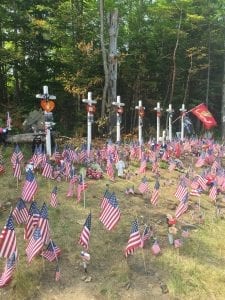 Last Wednesday, July 10th, to be exact, my wife and I were traveling back from a very short visit to Central Maine. We were driving along route 2, through New Hampshire, when we happened to drive by a newly solemn and reverenced spot in Randolph. The place was nothing special, except for the hundreds of American flags and the seven large white crosses that adorned it. This place, although until very recently just another unremarkable and unremembered grassy area at the edge of this small New Hampshire town, now borders on fame. It is the spot, yes, the exact spot, where seven motorcyclists lost their lives only last month. Those everyday people, although among them were several exceptional military Americans, were simply out for a bike ride on a beautiful day when their lives were suddenly ended by a highway accident. How profoundly sad that is.

As Lorna and I passed the makeshift memorial that I hope becomes a permanent landmark in our country, I decided to stop and pay my respects to these fellow citizens that I will never meet but will always respect. I took a few photos with my phone. Cars were noticeably slowing as they passed behind me. That sound somehow brought me closer to the terrible idea of what had happened there, and to the reality that we Americans are all one. We all feel the pain of those who suffer. We all respect our dead, and morn them.

Truthfully, honestly, the sight of that memorial was simply amazing to me. It struck me that the two symbols erected there were seven large white crosses, obvious and worthy references to the Christian faith, and countless, at least hundreds of variously sized American flags, the ultimate symbol of patriotism and of our country. I thought then that when it really comes down to it, despite all the political bickering and the ‘rights’ brandishing that some factions of our nation admonish us with, American flags and large crosses are what we ultimately turn to. God and country are what we, as true Americans, SHOULD turn to, in my opinion.

Lorna and I have returned home now, but all day today I was somehow haunted by the sight of that memorial to those innocent, fun-loving and patriotic Americans on those big beautiful motorcycles, so, early this evening I went out and purchased seven flags and arranged them in a semi-circle in front of the large maple tree on our front lawn.

I was just pushing the seventh small flag into the ground when a big, shiny, red pickup truck passed by our house. I looked up as the horn blew and as both occupants lowered their windows and gave me a wonderful thumbs-up. I was proud of them; I am very proud to be an American!