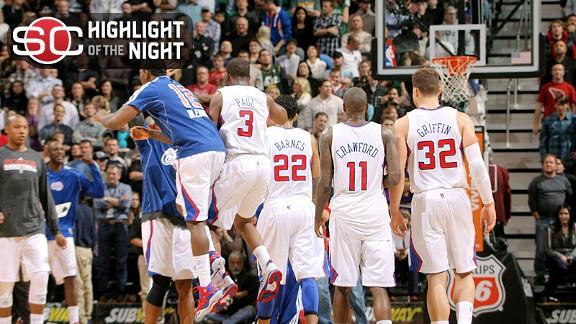 SALT LAKE CITY — Chris Paul could hardly be heard over Jay-Z’s pounding music as his Los Angeles Clippers teammates sang along in the visitors’ locker room.

The Clippers had just pulled off a 19-point comeback for their 16th straight victory — in a venue where they had often struggled.

More on the Clippers

For more news, notes and analysis of the L.A. Clippers, check out the Clippers Report. Blog

Paul did most of the damage, leading the Clippers (24-6) with 29 points, including the final seven, as Los Angeles squeaked out a 116-114 win Friday night over the Utah Jazz.

The last time the franchise won three straight in Salt Lake City was 1979-81 when they were the San Diego Clippers.

“This one is a great win for us because we kind of needed a challenge,” said Blake Griffin, who added 22 points and 13 rebounds for the Clippers. “(We had) to prove not only to everybody else, but to ourselves that we can still win close games like this and win a game down 19 in the third quarter.”

In the opposing locker room, the Jazz were lamenting another one that got away — the second loss at home to the Clippers during their franchise-record streak. Utah dropped the first by one on Dec. 3 after leading by 14.

On Friday, ex-Clipper Randy Foye put up a 3-pointer at the buzzer that was contested by Matt Barnes, but no foul was called. Foye finished with a season-high 28 points for Utah.

Rallying for their 16th straight victory Friday, the Clippers own the fifth longest win streak in the past 10 NBA seasons. Here’s a look at that list:

Foye did his best not to say anything about the officiating.

“I felt as though I pump-faked,” Foye said. “He knew that I wanted to shoot the 3 and I felt the contact. He made me go straight up and shoot the ball straight down. It was just a tough play.”

Barnes, averaging a career-high 10.8 points off the bench, was held to six points after scoring 21 and 20 in the Clippers’ past two wins.

Asked before the game about his success this season, Barnes said he had “just been stuck in a bad situation for a little while.”

“Last year, playing with the Lakers, I was told when I could shoot,” Barnes said, according to the Los Angeles Times. “If I made mistakes, I’d come out of the game. This year [coach] Vinny [Del Negro] has installed a lot of trust in me. He lets me go out there and play my game. If I mess up, he still sticks with me and that goes a long way with any player.”

Paul was tough down the stretch, hitting the clinching free throws after getting fouled by Al Jefferson with 3.4 seconds left.

“When (DeAndre Jordan) came to give me the ball screen, I wasn’t worried about (Gordon) Hayward, I was just worried about Al Jefferson,” Paul said. “I could tell (Jefferson) was going to try and blitz me. Anytime two guys try and trap me, I’m always going to attack the slower guy. If they wouldn’t have called the foul, I was right around Al anyway.”

Paul sank both free throws this time, after missing one with 18 seconds left that allowed Jefferson to grab the rebound, draw a foul and sink two free throws at the other end to tie it at 114.

Paul made sure he hit both the next time.

Just like the first game this season against the Clippers, Utah had the upper hand early.

The Jazz used a 36-point second quarter to turn a seven-point deficit into a 58-48 halftime lead. Utah reserves did most of the damage.

Hayward’s 3-pointer tied it at 34 with 7:04 left in the second and he scored 10 straight for the Jazz, who forced eight turnovers in the quarter and held the Clippers to 37.5 percent shooting.

Foye, who kept Utah close in the first with a 13-point quarter on 4-of-5 shooting, gave the Jazz their biggest lead of the half, 54-41, with two more free throws.

Paul provided the offense in the third with 13 points on 4-of-6 shooting.

“At the beginning of the third quarter, they made another run at us but then we got a little bit of a rhythm and then started guarding. We started getting some stops and getting out in the open court,” Del Negro said.

“Give Utah credit but our guys battled back tonight. They found a way to win and that’s what it’s all about. We stayed together, we weathered the storm when we had to and gave ourselves a chance and we were fortunate to make enough plays.”

Jefferson added 22 points for Utah. Hayward had 17 off the bench.

The Clippers had six players in double figures. DeAndre Jordan had 16 points and 10 rebounds.

“It’s all tough,” Jazz coach Tyrone Corbin said. “On our home court, we had a lead, we gave up the lead, but we continued to fight. We made some mistakes but fought our way through it and had a chance to win the ballgame at the end. Unfortunately, they got a lot of free throws.”

Points in the paint were identical and rebounds were close (36-35 Jazz), but the Clippers had a four-point edge on second-chance points.

An unidentified Jazz employee was disciplined and had his access to the team Twitter account discontinued after what team officials deemed an inappropriate tweet regarding the firing of Nets coach Avery Johnson and Brooklyn’s interest in Phil Jackson. The tweet said Jackson only wants “great players,” an apparent reference to ex-Jazz point guard Deron Williams, who had criticized Johnson’s offense. … Jazz point guard Mo Williams still has swelling in his sprained right thumb and remains out indefinitely. … The Clippers got a scare late in the first quarter when Lamar Odom came up limping. He returned in the second and finished with 12 points. … The Clippers failed to register a blocked shot despite coming into the game averaging 6.52.

Information from The Associated Press was used in this report.

Copyright by STATS LLC and The Associated Press