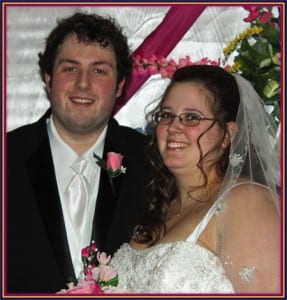 Samantha Champine and Zachary Hutchins were married on March 1, 2014. The bride is the daughter of Joe and Keri Champine of Worcester. The groom is the son of Rebecca Wilbur of West Topsham and Lonnie Hutchins of Berlin.

The ceremony and reception were held at the Montpelier Elks Lodge and Country Club, with Nickolas Gray serving as the officiant. Sydney Champine served as maid of honor, and Eric Bliznak served as best man. Rebecca Baldwin was the bridesmaid and Alexander Assur was the groomsman. VIEs were Brittany Lafirira, Aloha Ratunil and Maximillion Eddy.

After a honeymoon in Washington, D.C., the newlyweds returned to their home in Ludlow.