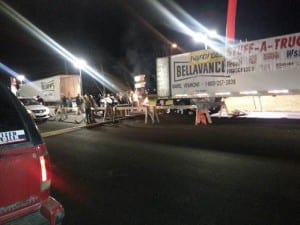 107.1 Frank-fm, Froggy 100.9 and 1450 WSNO announce that the Stuff-A-Truck Food And Funds Drive for the Central Vermont Salvation Army Emergency Food Shelf returns to 802 Toyota  Scion and Twin City Subaru next to the Berlin Mall on November 21st. The stations will attempt again to stuff a Bellavance tractor trailer with canned food, and will also be accepting monetary donations in the Salvation Army’s signature red kettles.

Stuff-A-Truck enters its 12th year of giving with a bigger need due to harder economic times, according to Frank-FM Program Director and morning Show Host, TJ Michaels. “We’re all seeing more difficult times and are thinking about how that’s going to affect low income families this winter. The Salvation Army has seen a 115% increase in the number of families requesting help over the past two years.”

The food raised during Stuff-A-Truck has in years past sustained the Salvation Army’s Food Shelf for the entire year on very little or zero additional funding. Last year the program broke records and raised more food and funds than ever before, but there is also a higher demand of families seeking assistance. The 2012 Stuff-A-Truck effort garnered so much support that a second tractor trailer was brought in. Even though the effort was incredible, “more need” means more food is needed, and the Salvation army saw their supply running low in mid-September.

“I’ve watched this event grow from 6 tons in our first year to an 11-year total of 152 tons and almost $100,000 dollars in monetary donations,” said Michaels. “With the weakened economy, energy costs being higher, low income families are under more pressure to decide between food and heat or food and medicine this winter. That’s a choice that no one should have to make. In the Green Mountain State we’ve proven that we take care of own. I can’t stress how important this year’s event is!”

For the past 11 years, Frank, Froggy and WSNO, with help from the citizen soldiers of the Vermont Army National Guard, 802 Toyota Scion and Twin City Subaru, have been setting up near the Berlin Mall every November. Last year over $12,000 was raised and 18 tons of food! What started with just a 48-foot long empty Bellavance tractor trailer today looks like a traveling circus has come to town. RVs, flood lights, bouncy houses, the truck clad now in banners from supporting business, rock and country music fill the air, and soldiers and volunteers cheer and scramble to unload incoming vehicles with non-perishables for the Central Vermont Salvation Army Emergency Food Shelf.

Michaels says, “The first year there was none of this; in fact our Stuff-A-Truck sign on the side of the trailer was made from two sewn together king size white bed sheets and some black spray paint. There were no RVs either, we slept in the back of the truck with the canned food, in a tent and it was really cold! Although the event looks much different today, we look to the Salvation Army’s motto of ‘Doing The Most Good,’ the mission is still the same to stuff the truck as full as possible and raise money for the emergency food shelf.”

Stuff-A-Truck has become the way that Central Vermonters usher in that holiday spirit of giving. Even the Vermont Association of Broadcasters has noticed the effort, awarding Michaels one of their Community Service awards for 2012.

Michaels and Froggy 100.9 Breakfast Club Host JD Green will brave the elements at 802 Toyota Scion and Twin City Subaru next to the Berlin Mall live from the back of a Bellavance tractor trailer 24 hours a day until the truck is full.

According to Green, “We don’t go home – we go on an emotional roller coaster ride. Along with all the outpouring of support and goodwill, we hear very touching stories from the people who donate and relate how they – or someone they know – were helped or at one time in their lives by the Salvation Army.”

JD and TJ will break in a new Corps Officers at this year’s event. Newly installed Lieutenants of The Central Vermont Salvation Army, Jason and Jenn Brake are about to participate in their first Stuff-A-Truck event.

The Stuff-A-Truck Campaign kicks off with a week of collecting monetary donations and non-perishable food in outlying Central Vermont communities, dubbed the “Get Off Your Can Tour.” That tour begins November 11.

Michaels says, “The event really is about neighbors helping neighbors and it takes the entire community to accomplish the goal. We are incredibly pleased to have 802 ToyotaScion and Twin City Suburu as sponsors for Stuff-A-Truck again this year! Their fine associates have really set the table for us by underwriting a good portion of the campaign. But help comes from all over the central Vermont community. In years past many central Vermont Business’s have chipped in to help including Bellavance Trucking, Vermont Country Campers, Applebee’s, National Life, TD Bank, Casella, SW Rentals, Sam Daniels and Members Advantage Community Credit Union.

Michaels adds, “They all have helped make Stuff-a-Truck a success in one way or another. We also couldn’t do this event without the support of the citizen soldiers of the Vermont Army National Guard. The Guard provides us with the manpower needed to get the job done! These soldiers are more than just trained military personnel; they all live and work within our community. The Guard also sends a Humvee on the “Get Off Your Can Tour.” We will pack it full every night. That food will be then loaded into the truck at 802 Toyota on the 15th and it gets us off to a great start. We understand that people in Morrisville, Randolph, Waterbury, Northfield, Stowe and Hardwick are all a part of this effort and the Salvation Army is definitely active in those communities. In the end it’s the Vermonters that donate that drive the truck, we just become a big megaphone of encouragement!”

Do your part by bringing donations to the Stuff-a-Truck event, Thursday, Nov. 21 to Saturday, Nov. 23, at 802 Toyota Scion/Twin City Subaru next to the Berlin Mall.

To participate in the “Get Off Your Can Tour,” bring your donations to any of the following locations:

107.1 Frank-Fm, Froggy 100.9 and 1450 WSNO are also looking for people to organize can drives at their work, school or church. If you are interested, you can pick up a Stuff-A-Truck collection kit at the radio station at 41 Jacques Street in Barre, or e-mail tjmichaels@greateasternradio.com for a PDF version.