by vt-world
in Events, Local News
0 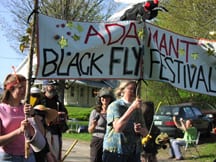 By Aaron Retherford
Do you hate black flies? Try living in Adamant. Actually, maybe you shouldn’t.

Adamant’s black fly problem is so dreadful, that in order to garden, residents are forced to wear full-body protective nets—fittingly sold at the Adamant Co-op.

It’s so bad, residents decided 14 years ago, that if you can’t beat those ruthless blood suckers, join them, spawning the annual Adamant Blackfly Festival.

And once again, it’s that time of the year when Adamant residents curse those incessant insects. So why not join them in some wacky fun at the 14th Annual Adamant Blackfly Festival hosted by the Adamant Co-op at 1313 Haggett Road on June 4.

The festival has everything you could think of…and probably things you would never consider. There will be live music all day long (starting at 10 a.m.), featuring French Canadian dance tunes, classic folk music, and some didgeridoo jams.

One of the highlights of the event is the Blackfly Parade at 2 p.m., which lasts about two-tenths of a mile.

“It’s really zany,” Co-op volunteer Karen Kane said. “It’s farm tractors, a marching band, and this year it will be combined with the fashion show. So there will be people in pretty outrageous and eclectic outfits.”

What else would you expect from the oldest Co-op in Vermont and possibly the nation?

Well, how about a Blackfly Pie Contest, where contestants share their visions of the perfect blackfly pie. Slices of those pies are then sold after the judging. Kane won last year with a vegan pie that was “totally minimalist”, but others enter pies with raisins or other blackfly-ish decorations.

Rounding out the festivities will be the all-new Blackfly Poetry Slam. Geof Hewitt, Slam Poet Laureate of Vermont, will host. Attendees can bring an original piece of writing that can be presented in 3 minutes or less. It doesn’t need to be traditional poetry. Judges selected from the audience will score each piece for bragging rights and a modest prize.

The festival is free to attend. If you have an itch to spend some money, there is a silent auction with chances to win local gift certificates, experiences, travel and more. Or for the hungry festival goers, a grill with jumbo hot dogs, chicken sausage, salmon burgers, salads, and baked goods opens at 11 a.m. The money raised benefits the Co-op, which will also be open during the day for those who need snacks or a black fly net.

“It’s just a relaxed, fun, zany day,” Kane said. “Expect the unexpected. It’s a great way to see your neighbors, enjoy the countryside, listen to music, eat good food, and hopefully the black flies will not be present.”

Negative Media has Effect on Society

Negative Media has Effect on Society