Celebrate May Day in Barre

Celebrate May Day in Barre 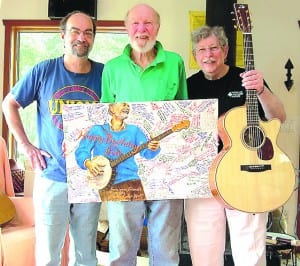 An Italian dinner, an award-winning film, and a tribute to an American musical icon will fill Barre’s Old Labor Hall, 46 Granite St., on May 1 for the Barre Historical Society’s annual celebration of Primo Maggio.

The festivities, titled “Songs and Social Justice,” begin at 5:30 with a lasagna dinner (meat & vegetarian) and cash bar, followed by a showing of The Internationale and a question-and-answer session with New York filmmaker Peter Miller. The 30-minute film tells the story of the workers’ anthem dubbed “the only song that could change the world.” It was regularly sung by the Italian stone workers who built the Labor Hall in 1901 and who began their annual Primo Maggio celebration shortly thereafter.

The evening will conclude with a sing-along tribute to folksinger and musical activist Pete Seeger. Seeger, who died in January, was a supporter of the Hall, where over 300 people gathered in 2009 to celebrate his 90th birthday. The music will be led by long-time local folk musicians Ben Koenig and Mark Greenberg, also known as Anything Goes. They will be joined by friends including Andy and Naiomi Pitt, Delia Robinson, and Jairo Sequeira.

Seeger is also featured in The Internationale, along with British folksinger Billy Bragg and people from China, the Philippines, Russia, and elsewhere. The Detroit Free Press described the film, which was short-listed for an Oscar nomination, as “a stirring documentary about the radical song and its impact on social change throughout the world.”

Peter Miller teaches filmmaking at Wagner College. He previously appeared at the Labor Hall in 2008 with his film Sacco and Vanzetti, winner of the American Historical Association’s best film award.

The Internationale is being presented in conjunction with the Global Labor Film Festival.

Tickets for Songs and Social Justice are $25, or $20 for union members, seniors, and students. The may be purchased at the door or online at www.oldlaborhall.com. For more information or reservations call 802-479-5600. Proceeds from the Primo Maggio celebration will benefit the Labor Hall.