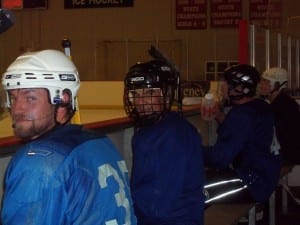 Games are on Monday and Tuesday evenings, pickup style hockey for 90 minutes each at Norwich University’s Kreitzberg Arena (Tuesdays) and at Montpelier’s Central Vermont Memorial Civic Center (Mondays) starting October 14 and 15 and running to early March, 2014.

All of the Club’s programs are FUN Hockey, with NO body checking, NO slapshots, NO rough play, and NO fighting. Age of players ranges from 20s to early 70s, with most in their 40s, 50s, and 60s.

If interested, call Kevin Reed at 802-485-6840, or email him at kreednfld@yahoo.com for information.