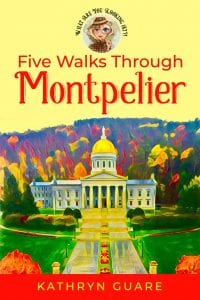 One of the nicest things about being in the smallest state capital in the country is that it’s easy to walk around and see almost everything without feeling overwhelmed.

The catch is, you don’t always know what you’re looking at. Whether you are a visitor or a long-time resident, you might find yourself strolling around the historic downtown, enjoying its vintage character, and wishing you had just a little more of the backstory. Who lived in those gorgeous old single-family homes on Main Street? What is that red castle-looking thing across the street from the State House? Why does the library have two names?

Answering these questions and more, Montpelier native and author Kathryn Guare is your companionable guide for her recently published book, Five Walks Through Montpelier, Guare packs a lot of information into this slim volume, bringing the history of her hometown to vivid life by sharing stories of its highs and lows, its heroes and ghosts, its well-known sights and hidden treasures.

The book is a delightful read for long-time residents, who may learn a few things they never knew while smiling over descriptions of events and sites they remember well. It also fills a gap for tourists to the capital city. Visitors will find the guide helpful for its details on downtown Montpelier’s shops and restaurants, as well as pointers on where to find walking trails, live music and every one of the city’s mouth-watering bakeries.

Five Walks Through Montpelier is available at Bear Pond Books, the Montpelier Visitor Center and the State House Gift Shop, and it can also be ordered at https://squareup.com/market/kathryn-guare or by contacting the author directly at kathryn@kathrynguare.com. It is also available in audio format, narrated by the author, from Amazon/Audible and other audiobook retail sites.

Along with this latest publication, Guare is also the author of the award-winning Conor McBride Series of suspense novels as well as Where a Wave Meets the Shore, a historical novel set in 1950s Ireland.

The following is an excerpt from Five Walks Through Montpelier, standing in front of the Main Street Grill at 118 Main Street.

“In the 1960s and 70s, this was the Lobster Pot, which had a bar on one side and a restaurant on the other. The neon sign that spanned the two doorways was nearly as big as the one on the roof, and had the added feature of a neon-lit lobster. The restaurant had the area’s first salad bar – a true “salad boat” in keeping with the nautical interior, and it was THE place for dining out in Montpelier for a couple of decades.

Earlier still, this was the site of Miller’s Inn, which got rolling in the 1880s, in the middle of Vermont’s Prohibition era. William Miller was the proprietor, and the inn was an expansion of his grocery and bottling business. He bottled a number of different beverages – ginger ale, cider, club soda – but his most popular item was a near-beer called “Uno”. It operated on something of a legal razor’s edge. A lengthy court case had not been able to determine if it violated the liquor laws or not. He was raided in 1892 but nothing illegal was found. There’s an old folk tale that Miller kept his “special stock” on a hinged shelf above a covered hole in the floor. A flick of his wrist and all evidence disappeared at the first sign of trouble.

It’s interesting to note that while federal prohibition ran for 13 years between 1920 and 1933, Vermont’s law was enacted in 1852, so we were dry for over 80 years! It’s hard to believe we lasted that long, but we seem to be making up for lost time. If you are looking for some of the famous Vermont-made craft brews and distilled spirits, you will find a wide assortment in Yankee Wines and Spirits. On shelves that need no hinges.”

How Do You “Let Go of What No Longer Serves You?”

How Do You “Let Go of What No Longer Serves You?”