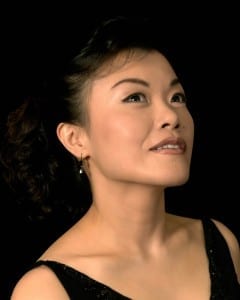 A regular and favorite at Capital City Concerts, Baltimore soprano Hyunah Yu last performed for the series in 2008. Yu’s strong ties to Vermont began in 1998 when she first appeared as a soloist at the New England Bach Festival, directed by Blanche Moyse. Soon afterward she came to Capital City Concerts to work with Louis Moyse and returned frequently in subsequent years to perform and work with him.

Yu was a prize winner at the Walter Naumburg International Competition and a finalist in both the Dutch International Vocal and Concert Artist Guild International competitions. She has performed with major orchestras including the Seattle Symphony, Baltimore Symphony, Boston Baroque, Sejong Soloists, the Bournemouth and Milwaukee Symphonies, Concerto Köln, and Salzburg Camerata. An avid chamber musician, Ms. Yu has sung with the Philadelphia Chamber Music Society, Baltimore’s Shriver Hall Concert Series, Lincoln Center’s Alice Tully Hall, the Vancouver Recital Society, the Phillips Collection in Washington, DC, Musicians from Marlboro Tours, Chamber Music Northwest, at the Bemberg Foundation in Toulouse, France, and substituted on short notice for Dawn Upshaw at Carnegie Hall. Most recently she sang in the world premiere of Symphony of Meditations by Aaron Jay Kernis with Seattle Symphony under Gerard Schwarz.

For more info and to charge tickets ($10-$25) go to www.capitalcityconcerts.org . Tickets may also be purchased (cash or check only) in person at Bear Pond Books.