Many thanks to the Calais citizens who participated in the annual Town Meeting Survey. Calais supported cell and broadband, prohibition of cell phones, and concern about opiates. Comments and results are as follows.

“Natural gas is obviously an important part of Vermont’s economy today, but we need to start aggressively weaning our economy and energy system from natural gas, oil and propane immediately.”

“If people are using heroin, etc., but they keep it to themselves, fine. They are only hurting themselves.”

“We need to expand the bottle bill, not shrink it. We need the incentives (5 cents, 15 cents) for people to pick up bottles and cans. Regulations will not do it – some people follow regulations, but others don’t. We should follow Maine’s lead on a better bottle bill.”

“There are too many laws already. Let common sense and judgement of each person decide.” 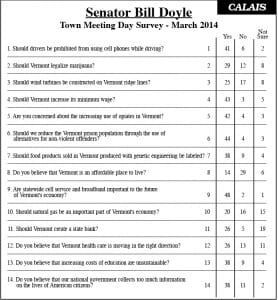