Build-A-Bike Builds More Than a Bike

Build-A-Bike Builds More Than a Bike

“I’ve spent so much time on it,” Tracy DeLillo says as he looks over the 1981 Harley-Davidson Super Glide that he and Facilities Manager, Phil Rowell, are rebuilding at the Veteran’s Place in Northfield. “Hundreds of hours sitting out here, putting things back, lining things up.”

Both Tracy DeLillo, a vet who is staying at the Veteran’s Place, and Phil Rowell, a case manager as well as the facilities manager, are rebuilding the bike in memory of Arthur Healey, the former Vice President of the Board of Directors, who tragically lost his life this past June in a motorcycle accident in Massachusetts.

“One thing he loved,” said Rowell, “was riding his Harley and veterans.” 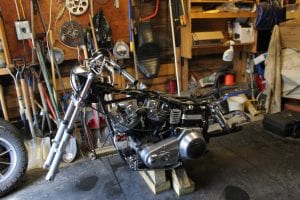 Prior to its purchase, the bike had sat for a long time and it had needed a fair amount of work. Rowell explained that he had wanted to get the bike because he wanted to “get somebody like Tracy who needed something to do” involved in an activity that was not only interesting, but also therapeutic.

But it’s not cheap to rebuild a Harley.

That’s why Rowell and DeLillo are glad to get some help. For example, three Harley dealerships have pitched in, donating and discounting parts. Their Build-a-Bike has also received support from the United Motorcycles of Vermont, which donated $500, the auxiliary post where Healey was a member plans to donate funds, and Vintage Vendor out of Burlington will be doing the paint at a discounted rate.

“There’s a lot of support from the motorcycle community,” DeLillo explained. “It’s going to be black cherry and it’s going to be awesome,” added Rowell. “We can’t wait to see it.”

Once this Build-a-Bike is finished, DeLillo and Rowell plan to rebuild another bike, which they will then raffle off to raise money for the Veteran’s Place.

Working on the bike is more than just busy work; the final outcome matters. Even with a cane, Rowell still rides.

“Only thing my disability hasn’t taken away from me,” he said. “And I’m not gonna let it.”

DeLillo has been out in the shed working on the bike for about a month now.  He held out his phone to show a photograph of the bike in its original state. 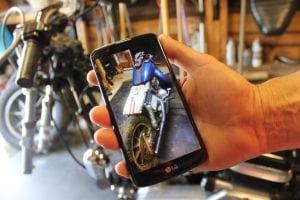 “It had moss on it, you couldn’t see any shine on it,” he said as he swiped through different pictures. It doesn’t take much of a stretch to see that the bike seems to represent the bigger picture of the Veteran’s Place.

A transitional home for homeless veterans, the Veteran’s Place offers veterans a chance to rebuild their lives.

Veterans are here for a variety of reasons but ultimately they just need a little help putting things back together. While some simply cannot pay their bills, others are managing mental health issues. Many have struggled with disabilities related to their service, and at times struggle to get the assistance they need.

Started in 2009, the Veteran’s Place has up to 26 beds, and vets can stay for up to two years. And it offers more than a space to eat, a place to sleep, and the ability to connect to social service; it fosters community and pulls veterans out of depression and isolation.

“We do, for the most part, the maintenance on the building,” said DeLillo. “You’ll have guys who are carpenters, electricians… Makes you as a person have a reason.”

One example of this is when DeLillo stepped away from the bike to give a tour of the wood shop. He pulled birdhouses done by resident Earl Gleason down from a shelf, and marveled at their fine craftsmanship. “No nails!” He exclaimed. “All dowls!” These veterans, too, are finding new ways of 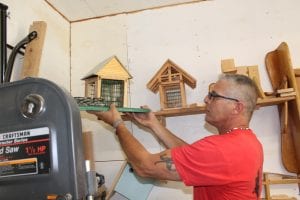 DeLillo’s the one doing most of the physical work on the bike and he believes that it has helped him.

“I lost interest in a lot of things that I used to enjoy,” he said. But because of Rowell’s idea to rebuilt the bike, DeLillo found something that got him out of his depression. “If I didn’t have this, I dunno what the heck I’d do.”

DeLillo hopes to be done rebuilding the bike in a couple of weeks. It’s been a while since he has been out on the road, estimating around seven to eight years. His first bike was, you guessed it, a dirt bike. “If I didn’t do my homework: No dirt bike. It absolutely worked. Some kids got ponies, I got a dirt bike.”

Originally from New London, Connecticut, DeLillo will soon be traveling south. “I’m heading to Florida. I have two grandchildren, my oldest daughter, and my mom there.” He will be closer to family and the winters will be better.

Plus, he’ll be able to ride his newly built bike.