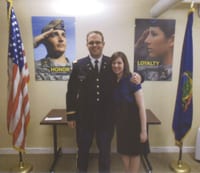 A wedding between Kayla Blanchard and Devin Holland is scheduled for May 30, 2015.

Holland, son of Tim and Cathy Holland of Barre, graduated from Spaulding High School in 2009 and UVM in 2013. He works at Norwich University.

Chiropractor Services Must Be Kept Safe in FY16 Budget

Chiropractor Services Must Be Kept Safe in FY16 Budget