Black Bear Complaints on the Rise

Black Bear Complaints on the Rise 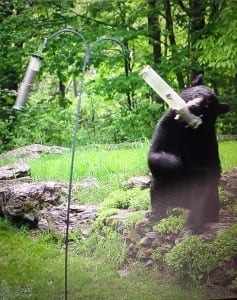 The Vermont Fish & Wildlife Department has received a large number of calls recently from members of the public complaining about bears.

“Our phones have been ringing constantly the last couple of weeks with calls from people asking what to do about a bear that has been visiting their yard,” said Col. David LeCours, Vermont Fish & Wildlife’s director of law enforcement. “The first thing we tell them is to identify and remove whatever is attracting the bears.”

People often inadvertently encourage bears to come out of the forest by providing food without realizing it. Some of the most common sources of food that attract bears are pet food, bird feeders, barbecue grills, household trash containers or dumpsters, and campsites with accessible food or food waste.

Bears that have found food near someone’s house nearly always return to find more, developing habits that can lead to the bear’s ultimate demise. Relocating a nuisance bear is very difficult – they frequently have to be put down.

“People often assume that we can just capture and move a bear to a more remote area once it becomes a problem,” said Forrest Hammond, Vermont Fish & Wildlife’s bear project leader. “Bears can easily move dozens or even hundreds of miles in search of food, so there’s really nowhere in Vermont we can put a bear that it won’t find people’s houses if it’s determined. Prevention is really the key. The only way to deal with a problem bear is to remove whatever is attracting it in the first place.”

Feeding a bear is not just bad for the bear, it’s also illegal. A law was passed in 2013 making it against the law to feed a bear and wardens have begun issuing tickets to violators.

Vermont law also states that residents must take reasonable measures to protect their property from bears before lethal force can be taken. Some of these measures include:

– Keep chickens and honeybees secure within an electric fence or other bear-proof enclosure.

– Do not feed birds April 1 through November 30. Bringing feeders in at night doesn’t work, because of seed that is spilled on the ground.

– Store trash in a secure place. Trash cans alone are not enough.

“We’re in a period of transition with this new law,” said Hammond. “People are really starting to get the message and have been taking steps to scare bears away or remove attractants as the law dictates, rather than just shooting the bear.”

“Our wardens have been a tremendous help in our efforts to habituate bears to stay away from people when there is a problem,” said Hammond. “They’ve been working overtime trying to help landowners while also striving to save the lives of these bears.”

For more information about living with Vermont’s black bears, see the Vermont Fish & Wildlife website (www.vtfishandwildlife.com). Fish & Wildlife also asks that you use a form on their website to report any incidents you may have with Vermont bears at www.tinyurl.com/ReportBearVt