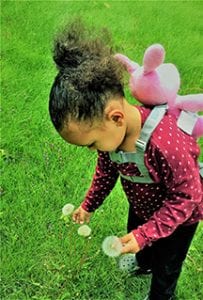 So, several days ago my nearly three-year-old granddaughter Nahla and I went on a great explore up the sidewalk of a nearby street. We do this often on sunny spring and summer days. Nahla dons her bunny, which is a stuffed toy that she wears on her back. The bunny has little straps that buckle at Nahla’s front and a long one with a loop at the other end, that Papa, (that’s me) puts around his wrist.  The strap keeps the bunny safe and stops him from hopping out into the street.

On this explore, on that particular day several days ago, the three of us, (Nahla, Papa, and bunny) discovered many wonderful things, as we always do. There were trees with big green leaves, and birds and bees to see. There were, also, all manner of tiny crawling things minding their own business on that sidewalk, completely unaware that some of them would soon be dispatched from this world by the intentional smack of a toddler’s well-placed sandal.

One way to tell for certain that warmer weather is finally here, here in the Green Mountain state, is the arrival of a young child’s favorite flowers that have spread and blossomed all over the lawns that line the edge of our special sidewalk, and, probably, yours. The golden blossoms of all those dandelions are, truly, gold to a toddler as she gathers as many as will fit in her small hands, gifts, wilted or otherwise, that Mom and Grammy will receive when our explore is over.

There is ‘another’ flower, or at least a completely different looking flower, a lofty, fluffy-ticklish one inhabiting those same lawns. For some reason, my granddaughter is almost innately aware, as are millions of other toddlers, that if you pick one of these white, feathery things you can blow on it and something wonderful will happen. This flower’s seedlings will loft to the air, ‘like the down of a thistle’ as one old story describes a different occurrence, on an adventure, an explore, of their own. The tiny seeds, which some believe, even with their ingenious method of propagation, are the products of mere chance, will drift away, each on its own little, organic-down parachute attached by a thin stem.  They all will land and some will find their way into the soil.

Those things are the only hope of this flower’s species, and they seem very adept at succeeding in their task, especially at this time of the summer. All future generations of them will, someday, blossom into Nahla’s ‘other’, yellow flowers. The early greens of some may be picked and eaten. Many will live to become the fluffy ones which will be spread further into the future by another year’s breezes, or excitedly plucked by some of my grandchildren’s-grandchildren’s generation and blown on out onto the wind. Thank you, Nahla, for spreading the gold.