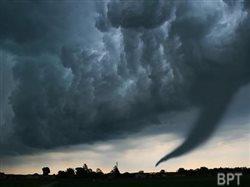 A peculiar corkscrew sensation goes up one’s spine when a tornado siren goes off in the dead of night. It means a tornado is on the ground. You know it’s coming. You can hear it and you can feel it. You just can’t see it and don’t know where it is until it might be right on top of you, literally.

Tornado season has arrived for many areas of the United States, and unfortunately, hundreds if not thousands of Americans will experience that sensation this spring and summer. For many, those sirens in the middle of the night might be the only warning they receive.

Best practices for improved warning processes continue to be examined after last year’s rash of tornadoes. The National Weather Service released a report providing guidance to weather forecasting offices (WFOs) across the country on lessons learned from the tornadoes that hit Oklahoma in May 2013. The tornado that struck Moore, Okla., on May 20, 2013, is estimated to have caused $ 2 billion in damage. The El Reno, Okla., tornado of May 31, 2013, is believed to be the widest tornado ever recorded with a base of more than two and a half miles wide and wind speeds estimated to have reached 300 miles per hour.

Among the many findings of the report was the need for better communication to the general public about multiple threats happening at the same time, such as both tornadoes and flash flooding. Another finding was the need for greater coordination amongst Integrated Warning Teams, usually consisting of emergency response agencies, government agencies, local hospitals, media outlets, schools, military installations, and other organizations that need to be involved when dangerous weather hits.

“Response to tornadoes involves any number of different government agencies, public institutions, and of course the public,” says Peter Miller with Orange County, Fla., Information Systems and Services. Miller and his team have been recognized for their use of software to develop processes for responding to natural disasters and use emergency mass notification services from AtHoc, Inc. “There’s a lot of preparation in advance and coordination that goes on behind the scenes, and it all happens during the toughest of circumstances.”

As a result, cities, counties and states throughout the country are constantly looking for ways to improve communications. Traditionally, one-way methods have been used to reach the public – either via weather broadcasters on TV or the radio, and/or texts via cellphone.

“New mobile technology allows for more direct communications targeted at populations in the immediate path of threatening weather, more than just using texts,” says Don Coash, director of business development and meteorologist with Accuweather, Inc. “Any time you can foster a two-way conversation, where recipients can send information back – status, requests for help and assistance, or damage updates and assessments – your overall degree of safety goes up.”

Capabilities exist today so that when a tornado is coming, people can simultaneously receive phone calls at home and work; texts and push notifications from their mobile phones/tablets; pop-up alerts on their laptops/desktops; messages via LED billboards and signs alongside roads and highways; and automated announcements via loudspeaker and intercoms at schools, athletic events, and malls.  Everything, all at the exact same time.

* Teachers, staff, parents and students can receive radar images of a tornado threat on their phone if they don’t have access to a TV, and receive maps for escape routes and traffic congestion to avoid.

* Companies with large field personnel in industries such as home health care, utilities, manufacturers, oil and gas and airlines can track where individuals are and see their location on a map in relation to an oncoming storm or other catastrophic event.

* People can send back information asking for help, directions or assistance via the push of just one button as opposed to having to dial phone numbers or enter in text under duress.

All of that beats just sirens any day … or night.