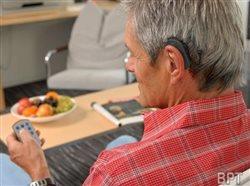 As a private pilot and frequent commercial passenger, John Walkup’s hearing worsened over a number of years. But during one memorable airline flight, he suddenly lost most of his hearing, leading to enormous life changes.

The impact of his hearing loss went beyond simply not being able to hear. His career ended abruptly. Walkup went on permanent disability and started looking for a new occupation that did not rely on hearing. Typically outgoing, he withdrew due to difficulty in communicating with others. He began avoiding social situations.

“Before I had the implant, in a restaurant, I would usually smile, and nod, and chuckle when things were said that were supposed to be funny,” says Walkup. “But I didn’t hear anything other than noise. It was the beginning of an isolation that I didn’t want.”

These feelings of being trapped by hearing loss and feeling subjectively isolated are not uncommon, but are often not acknowledged as being associated with hearing loss and hence a threat to our well-being, says Barbara E. Weinstein, PhD, who has conducted extensive research in the psychosocial impact of hearing loss in older adults. “Studies have shown that hearing loss is associated with negative emotional outcomes, including social isolation, reduced functional independence and depression,” says Weinstein.

Groundbreaking National Institute of Health-funded research also linked hearing loss to dementia in older adults. These findings have major public health implications for the world’s growing aging population in terms of prevention and intervention of dementia, one of the costliest and most-feared illnesses of aging.

“Hearing loss, social isolation, depression and dementia appear to be interconnected,” says Weinstein. “These conditions also all have a tremendous burden of illness in terms of hospitalization and long-term care. These findings are a call for increased hearing loss screening in the older adult population and better screening methods. Since many of the mental health screening tools are verbal, hearing loss can exaggerate findings of a dementia or depression screening, which may lead to a misdiagnosis and the wrong treatment approach.”

Researchers are investigating whether or not treating an underlying hearing loss will slow the advancement of dementia. Because shared pathways in the brain might be the reason behind the dementia-hearing loss connection, it is possible that taking measures to improve hearing will also improve other emotional factors which are strongly associated with dementia.

Hearing aids can help people with some hearing loss, but may be less effective in certain situations where older adults have the most difficulty hearing, such as understanding speech in a place with a lot of background noise, like a restaurant.

For people whose hearing has declined to levels considered severe to profound deafness like John, cochlear implants are an increasingly common option. People who have lost their hearing completely in their 60s and 70s do not want to live the rest of their life in silence. More than ever, the baby boomer generation wants to remain engaged with family and friends and live independently for as long as possible.

Older recipients have been shown to gain a substantial benefit from cochlear implants in terms of quality of life, as demonstrated by health status, success in the common activities of daily living and perceived satisfaction after cochlear implantation.

Researchers have seen a great deal of success among older patients who receive cochlear implants, particularly those who are implanted earlier in their hearing loss experience. Scientists believe implantation of older adults earlier might promote better results because of relatively better neural plasticity, shorter duration of deafness, and less neural degeneration.

Several weeks after Walkup’s surgery, the external audio processor was turned on. “And that’s when I first knew that this was going to be a very substantial improvement in my life,” says Walkup. “When they turned it on, it was such a surprise. I wept. I heard so much more at the beginning than I thought I would and within a short amount of time I regained the ability to hear and understand so many sounds that I hadn’t heard in years.”

Taking care of your dog's teeth: One more way to show you love him

No more road rage: How smart cities and driverless cars make life better for everyone

No more road rage: How smart cities and driverless cars make life better for everyone