Barre Town Citizens Would Prohibit Use of Cell Phones While Driving

Barre Town Citizens Would Prohibit Use of Cell Phones While Driving

Many thanks to the citizens of Barre Town who participated in the Annual Town Meeting Questionnaire. Barre Town citizens would prohibit the use of cell phones while driving, believe education costs are unsustainable, and that health care is not moving in the right direction. Comments are as follows.

“Placing fees on plastic bags is wrong. The people need to speak out. The bags they now give out are flimsy and almost useless.”

“When has government ever run anything better than the private industry? Do we really need to create a new bureaucracy?”

“I think GMO labeling would be good for consumers, but question the amount of money that would be spent in lawsuits brought by big companies.”

“The power to tax carries with it the power to destroy. No one should pay a total of 35% of their income in taxes.” 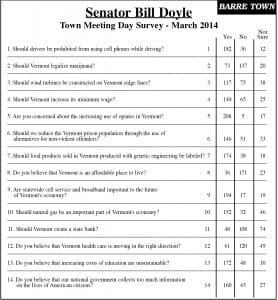