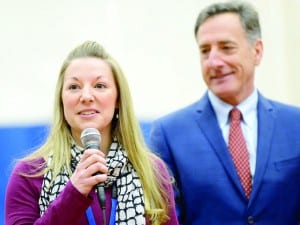 Katie Sedore, an English and Language Arts Teacher at Spaulding High School in Barre, was surprised with an unrestricted $25,000 Milken Educator Award during a school-wide assembly last Friday. This prestigious honor, the only one presented in Vermont, will be bestowed in 2013-14 upon up to 40 of America’s most outstanding secondary school educators.

“Our public education system is at the heart of America’s promise and essential to safeguarding the American dream for future generations,” said Lowell Milken, chairman and co-founder of the Milken Family Foundation.

“With research confirming that effective teachers represent the single most important school-related factor in raising student achievement, it is important to honor them, learn from them, and inspire more capable people to enter the profession. As the program’s motto extols, the future belongs to the educated.”

Described as a natural educator, Katie Sedore is a young teacher who carries herself with the bearing of a seasoned veteran, a characteristic that accounts for her success with all students, including those who face the greatest challenges. Ninth-grade language arts students at Spaulding High School often enter her class several grade levels behind only to find that they are held to the same academic and behavioral standards as other students. With Sedore on their side setting clear, consistent standards – and treating them with unaccustomed respect – they find themselves in an environment in which they can – and do – learn. Rarely is a student sent from her class for behavioral problems.

In the classroom, Sedore implements a multi-tiered approach of differentiated instruction, academic involvement and tireless volunteerism. Her classes are designed for student engagement, such as her persuasive speech class on the subject of violence and the media which culminated in a live debate with guest judges. Sedore is a major player on the school’s literacy team, developing its curriculum. In addition, she spearheaded a new reading intervention course to help students catch up or progress at grade level. Taking literacy efforts to a new arena, she sought out physical education teachers to promote the teaching of sports literature.

Sedore runs the after-school Homework Club, as well as teaches at the Granite Academy—an alternative program started by Spaulding High’s special education department. Colleagues observe that gains made by students who are often most resistant to learning amount to nothing short of a transformation in the classroom. Vermont NECAP scores for her students showed marked growth.

Coming from a family of educators, Sedore understands the importance of pursuing excellence beyond the classroom and has contributed significantly to the school’s professional standing. She heads up the Spaulding Educational Support Team (EST) and co-chaired the school’s recent New England Association of Schools and Colleges (NEASC) recertification process. She is an active member of the current Spaulding Multi-tiered System of Support (MTSS) team. In pursuit of her passion for literacy she is following up her master’s degree with further graduate work to become a much-needed reading specialist.

The Milken Educator Awards, conceived by Lowell Milken to attract, retain and motivate outstanding talent to the teaching profession, is the nation’s preeminent teacher recognition program, dubbed the “Oscars of Teaching” by Teacher Magazine. Since 1987, the Milken Family Foundation, co-founded by Michael and Lowell Milken, has devoted more than $136 million in funding to the Milken Educator Awards, including over $64 million in individual Awards to nearly 2,600 recipients plus powerful professional development opportunities and networking with leading education stakeholders.

Do you buckle up your kids? New research shows one in four parents don't

Do you buckle up your kids? New research shows one in four parents don't