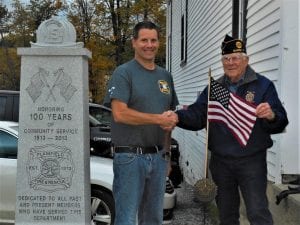 Shortly before Plainfield’s Old Days in September a U.S. flag and marker were installed at a granite monument at the Plainfield Fire Station. The monument is a tribute to more than one hundred years of service to the community by the Plainfield Fire and Rescue Department. “The American Legion has great respect and admiration for all first responders,” said Barre Post 10 Commander Melvin McKnight. “It seems especially appropriate, that with this flag, we acknowledge the work and sacrifices of the men and women of Plainfield’s Fire and Rescue team.” Greg Light, Fire Chief, said, “We are grateful, pleased and proud that the Barre Post has called attention to the many years of community service our Department has provided our citizens. People in town have expressed their appreciation for having the flag in place.”

Greg Light designed the monument and Andy Hebert is the sculptor who carved it.  Both are members of the Fire and Rescue Department and associated with Rock of Ages in Barre.

Vermont to Receive $1.37 Million from Johnson & Johnson for Violation of Consumer Protection Act