Pete Seeger once said, “Songs won’t save the planet, but neither will books or speeches.” He did however, believe songs could “help the world survive.” Why? Because it wasn’t the songs themselves, but the people they united; they were the ones who would accomplish this feat. 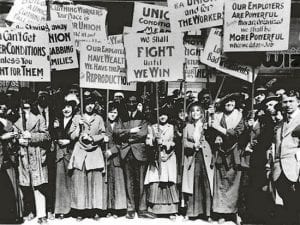 On Labor Day, September 3, songs and books and even bread will bring people together to remember Barre’s historical involvement in the labor movements of the early 20th century. Mark Greenberg, a local educator and musician, will present “Solidarity Forever–Songs of Unions and Labor”; the former Union Cooperative Store Bakery, now the newly restored Rise Up Bakery, will hold its soft opening; and the Vermont Humanities Council’s program Vermont Reads will discuss Katherine Patterson’s book, “Bread and Roses, Too.”

The Old Labor Hall, which is located at 46 Granite Street in Barre, was built in 1900 by Italian immigrants. According to the Labor Hall’s website, “they had immigrated to Barre, Vermont, to work in the granite sheds on the famous Barre Gray granite that gave Barre the name of the ‘Granite Capital of the World.’” What makes it a fitting place to discuss Patterson’s book, “Bread and Roses, Too,” is that this labor hall actually played a large role in the “Bread and Roses” textile strike of 1912 in Lawrence, Massachusetts.

When approximate 20,000 mill workers, many of them Italian and also women, faced a weekly pay cut, they walked out in protest. The Labor Hall’s website continues to explain that “Barre, like the much larger cities of New York and Philadelphia, offered to host the strikers’ children for the duration 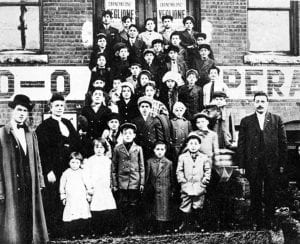 of the strike. Thirty-five children were greeted as they disembarked from the train in Barre with a heroes’ welcome, a huge parade followed by a “monster” banquet at the Labor Hall. All the children’s necessities were supplied.” The children stayed for over a month, not returning until after the strike had been settled.

A year after the textile strike, in 1913, a second bakery was built to meet the demand for baked goods and to help assist the original Union Cooperative Store Bakery, which was in the basement of the Labor Hall and which had suffered some damage due to a flood. It unfortunately closed in 1939 and was used to store various items for different granite companies. Sixty-five years later, the Barre Historical Society acquired the building and restoration began in 2015 under the leadership of E. Montpelier artist and teacher Carolyn Shapiro.

On September 3rd, 2018, the bakery will rise again. But the bakery, along with the fresh baked bread, won’t be the only thing to rise up: Mark Greenberg will present “Solidarity Forever–Songs of Unions and Labor.” According to Greenberg, “For centuries, working people have used songs to express protest and hope and as an organizing tool.”

His presentation will include live and recorded music and surveys American labor songs from the beginnings of the Industrial Revolution, through the Wobblies, and into the coal wars of the 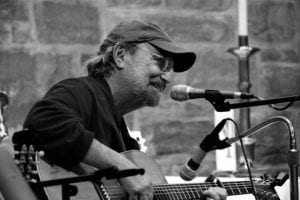 1930s. Greenberg, who was an organizer of Goddard’s faculty union in the late 1990s, has taught at Goddard College and the University of Vermont. He has also produced award-winning recordings for radio and video documentaries.

Greenberg believes that music and song is an effective way to unite people because “singing together is a true expression of community- whether at a demonstration or in a religious service. It also feels good.”

Reading also unites people, which is the leading mission behind the Vermont Humanities Council’s Vermont Reads program. Currently in its 16th year in operation, the program encourages people to read the same book and to engage in activities connected to the book’s theme. According to the Vermont Humanities Council’s website, “over 200 different Vermont towns, cities, and villages have participated in Vermont Reads to date.” This year’s book, “Bread and Roses, Too,” gets its name from the strikers’ banner.

The book is about two children, Rose, an Italian immigrant girl, and Jake, an American boy, who meet during the beginning of the strike. According to a 2006 Sunday Review in the New York Times, “Bread and Roses, Too,” “Offers a powerful mix of history and the psychological and moral depth we have come to expect from Paterson…Rosa is an immigrant girl, the studious daughter of a widowed Italian mother employed in the mills; Jake is an American ragamuffin and petty thief, a boy employed in the mills…” Therefore, it is appropriate that this book be discussed on Labor Day, which falls on the first Monday in September, and is dedicated to the achievements of American workers, both socially and economically.

When Greenberg was asked if there are modern day labor songs or whether these songs have disappeared or changed, he responded: “At least at the demonstrations I’ve attended in the past few years, group singing of well-known and easily-learned songs seems to have greatly diminished, if not entirely disappeared. This seems to be a cultural shift that I hear older, life-long (alas) demonstrators complain about.”

However, there are still groups that sing, like the Solidarity singers in Montpelier, that, according to Greenberg, keep the group protest song tradition alive. Therefore it is important to continue to share the stories, to take care of each with bread, and to come together to continue the community tradition of helping each other.

For more information, such as details and/or the schedule on the free events offered on September 3rd at the Labor Hall, visit www.https://oldlaborhall.org/, email info@oldlaborhall.org, or call (802) 479-5600.

The Show that I am Currently Binge-Watching: Vikings

The Show that I am Currently Binge-Watching: Vikings