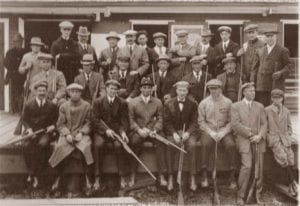 The Barre Fish & Game Club had long before started a regular program of outdoor shoots involving both rifle and shotgun events.  In the late 20s and 30s a “chicken” or “turkey” shoot meant just that.  The winners got live turkeys or chickens as prizes for their skill.  The late Ron Cruickshank, Irving “Evie” Palaoro and Eric Fracassi had a part in those events.  Amos King, one of our few life members, gave the club use of a range area on the Barre-Montpelier road (about opposite Harry’s) after the club had given up a restricted range area behind the Dugout Restaurant on the East Barre Road which it used for a time.  Shoots were also held off the Richardson road before that time and at the Riddel Pond in Orange and the Barre Gun Club range in Barre Town.  The club also held shoots at South Barre opposite the home of Amos King for several years with Amos donating use of the land.  It was there the first of the famed coon dog trials were held.

The first “home” of the club was a wooded area near Lower Graniteville which was purchased during the very active regime of William “Bill” Jorgensen as president.  He followed a period which saw “Kio” Granai and Judge H. Williams Scott among the club presidents and when the by-laws changed to limit the president to one year in office so that more members would have a chance at the post.  The new grounds at Lower Graniteville proved a bit too limited in open area for the club and were sold to D. A. Perry as a sugar place (which is what it really was, sugar house and all).  The purchase was a mistake so far as a range went but it proved to be financially a sound move for club finances.  Gelsie Monti aided the club to incorporate under the Jorgensen regime.

Probably the greatest area of club prosperity came during the reign of Fred Tenney as secretary and later as president.  By that time Tabby Loso and others had become interested in the club along with Quincy “Lee” Perry.  Membership climbed to over 1,500, thanks to men like Stefanazzi, Sironi, John Richardson, and others.  The club had over $10,000 in the treasury.  Shoots, coon trials, chicken barbecues and the reactivated sportsman’s shows in the spring were all producing revenue.  The late Fred Tenney set up sound budgets for the club.  The John Mekklesen acreage on Beckley Hill was first leased, and later purchased, during Tenney’s regime and that of Lee Perry.  The skeet and trap fields were established, good rifle ranges built and the first clubhouse was built, with an assist from Kenny Lunde.  Ike Lee, Paul Mattson, Everett Tucker, Ron Cruickshank and many other fine sportsmen like Bill Maxwell helped with the building.

It was during that period that the club received national recognition from Harrington & Richardson Firearms and when the first turkey planting programs were temporarily successful.  In the meantime the pheasant stocking, started by the late Edward Case who was once a club officer, and by Ernest Belville, were continued along with the periodic rabbit stocking which had always been a popular success.  Big coon trials were inaugurated under the Tenney aegis with the writer and “Little Joe” Perrault handling the profitable auctions and Ike Lee taking care of the trail work.  Everything the club touched turned to success and financial gain.  Gino Sassi also became active in the activities at that time along with Emil Osterberg—both dog men.  The trials were rated among the state’s best.

Lee Perry’s regime saw the major addition finished at the club’s permanent home on Beckley Hill and John Richardson became the fish and game focal point for the state and had a major role on conservation programs at the Capital.

Some years earlier, in cooperation with the Williamstown club, the Barre club, thanks to Harlan Storrs (a long time member and officer of both clubs) and “Tunk” Holmes of Brookfield, had been able to persuade the state to reclaim Rood Pond in Williamstown and Brookfield.  Members of both clubs worked on grading an access to land owned by Louis Mattson, also a club director at one time.  The land was later purchased by the state as an access.  The Barre club did a great deal of the stocking which transformed the former home of stunted perch and pickerel into one of the finest and most popular trout ponds in Vermont.  It was only one of many reclamation and conservation programs in which the Barre club assumed a major role.

Many years earlier, at our suggestion, since it was unwieldy to have 1,500 members contacted for all decisions, the Barre Club, which had grown to an organization managed by about fifty directors, had men under twenty-one and a few years older become directors on probation.  If they showed continued interest and a willingness to work for the club they became permanent directors.  It was a very wise move and over the years paid off with many fine club officials like Louis, Bob and Francis Taft, Walt and Paul Tenney, Joe Piro, Dick Aldrich, Pete Quinlan, Armand Couture, Bob Kerr, Harry Nadeau, the Stacy and Jaques brothers, as well as dozens of other fine sportsmen that came up through the ranks.  Many became club presidents during the 50s and 60s or assumed other important club responsibilities.  Other fish and game clubs were born and withered on the vine because they failed to provide leadership material for the future.  The Barre club had recognized that none of us go on forever and provided for that contingency with a wide program that has resulted in continuous growth over a half century between the regimes of Tim McGoff and Harry Nadeau, an era in which many of us have been proud to have had a small role.

The Barre Fish & Game Club is stronger than ever today.  It has two fine new skeet fields, an excellent range and sighting-in area open to the public, a sightly picnic center, ample equipment and room for needed expansion.  It has wise and valuable stocking programs, a strong voice in Vermont conservation and an excellent opportunity to preserve the environment for future generations.

The club has come a long way from that first keg of beer in the old Scampini Hall.