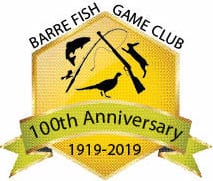 In the late 1800s and early 1900s there was a state organization to which individuals could belong, the old Vermont Sportman’s League.  It was more of a political body than a conservation club and it had a hand in electing Vermont’s governors.  As a matter of record Teddy Roosevelt, then vice president, was attending one of its dinners on the shore of Lake Champlain when he got word of McKinley’s assassination and had to take off for Washington.

It is entirely possible that many of Barre’s less affluent hunters and anglers felt a bit “left out” and wanted a club of their own.  At that time there was some general indignation over “bird trapping” by some citizens who had brought the practice over from southern Europe.  At any rate the meeting was called and the keg of beer tapped one evening.  My recollection is that the late Tom McGoff and Louis Bottiggi were the prime movers for the formation of a club.

It was in thea 1920s that the club started to flourish.  The Scampini Hall meeting place continued for a time and one of the early highlights was an indoor shooting match with the late Alfred Wilhelmsen (a fine pistol shot), competing against the Rev. J. Joseph “Joe” Fowler, who was Barre’s first real archery enthusiast.

During the next few years various cliques controlled the fortunes of the club and meetings were moved to the Blanchard block and other sites, particularly during the regime of the “Pirie Gang”, who had their private hunting club at “Bull’s Throat” in Maidstone.  The late Jim Pirie, Bob Bassett, Alex Riddel and others held the top club offices (at that time terms were not limited).  Gene Prindle, Harry Houghton, Joe Ladrie and others gave the club more local prestige, along with Earl Flanders of Orange, then chief warden for the state.

In the late 20s there came a change. Dr. E. H. Bancroft of South Barre, a veterinarian, became president and “Bill” Carle took over as secretary.  They started an intensive rabbit stocking program and when the club was short of funds Bancroft and Carle actually signed notes to pay for the bunnies on delivery.  They were reimbursed as the club membership fees (always only $1) came in. Under their active regime, during which Frank Woodcock, Jim Biggs, Wally Biggs, Con Sellberg and others became active in the club directorship, along with Ernie Belville and many others, the club membership started climbing to several hundred.

When Jim Biggs moved into the president’s chair the Barre club put on its first sportsman’s show.  It was a modest affair in the then new state armory on Jefferson street.  Admission price was only a dime.  The armory was heavily decorated with spruce bows.  Booths were set up by Frank Woodcock, Perley Haskett and other area sporting goods dealers.  Animals were obtained from the Mann game farm at Maple Corner and from anywhere in the state where they could be located.  The late Ernest Batchelder was active in the club at that time along with the Comolli brothers, Adolfo and Armando.

It was during that period that the Vermont Fish & Game Club was formed, with the Barre Club a leading light, and Jim Biggs, Joe Fowler and this writer as active participants.  By then the late Alex Kirton (a wonderful fly fisherman and gentleman) and the late Harold Wilson had taken over a big share of the membership solicitation duties.

It was also about that time that the Gunner Brook program came into being.  Alex Kirton, this writer, Americo “Mac” Galli and one or two others, realizing that the auto was making a big change in most people’s fishing habits, came up with the idea of having Gunner Brook, a handy stream, set aside for ill and crippled granite workers who couldn’t go far for their angling, and for children to enjoy.  The stream was closed to others (thanks to cooperation from Cliff Bailey and others along the stream) and stocked.  We also concocted the annual “derby” idea which has resulted in so much fine sportsmanship being taught.  John Richardson had become active in the program by that time and some years later William J. “Bill” Maxwell became enthused over the idea and carried it on for years until Everett Tucker succeeded him in recent years.

The 30s were the big early years for the club.  Eugene Stefanazzi and Romeo Sironi became active forces in the club, and I had taken over—one of my several terms in office.  Sironi and Stefanazzi put on the most intensive membership campaigns in club history and put the membership well over the 1,000 mark.  By that time regular meetings were held in the Worthen block and later at the Barre courtroom at City Hall.

Barre Fish and Game Club Early History—Part II will be in the next issue of The World.