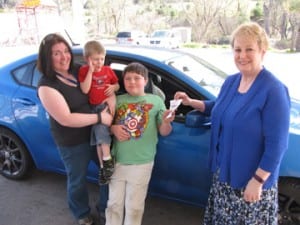 Ever since March 30 when The WORLD newspaper announced its first-ever $1000 “Grand Prize” treasure hunt in Central Vermont, the Andy and Danielle McMichael Family of Barre followed the clues each week and practically left no stone unturned until they hit paydirt on Wed., May 11 (Week 7).

“It was like finding the ‘immunity idol’ on Survivor,” exclaimed an excited Danielle, adding, “we tried looking under every loose stone at the quarry and elsewhere, and even visited the site where it was hidden but missed finding it on the first attempt.”

After the Week 7 clues came out on May 10, Danielle and the kids revisited that site and this time found the magnetized box, about the size of a cigarette pack, stuck in a rusty upside down pail on a fence next to a large rock with a plaque commemorating the construction of the dam/reservoir in the 1930s by the Conservation Corps.

“We’re sad to see it end,” they admitted. “Our kitchen table was turned into a treasure map for our search.” More good fortune came their way during the search, as they found three geocaches and helped return one lost dog to its owner.

WORLD co-publisher Deborah Phillips reaffirmed that no one at The WORLD knew of the location of the $1000 certificate until Danielle came into the office last Wednesday.

“We were amazed at how many people were following the treasure hunt and visiting the 19 business sponsors each week for clues. It was a perfect way to get people out of the winter blues and into the fun of springtime,” she noted. “We’ll do it again next year!”