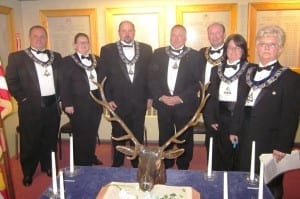 Following the ceremony, members, family, and friends were invited to a meal in the lounge. The memorial ceremony continued at 5pm at Barre City Park with the lighting of the Memory Tree. Over 370 names were read aloud and remembered. The Memory Tree can be seen in Barre City Park; it’s the tree with the small blue lights. The Memorial tablets are on display at the Lodge on the mezzanine level and available for viewing when the Lodge is open.