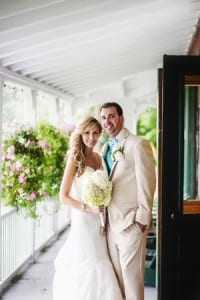 Mallory Backus and Samuel Shangraw were married September 6, 2014 in an outdoor ceremony at the Three Stallion Inn in Randolph. Penny Kellogg, mother of the bride, performed the ceremony. The bride was walked down the aisle by her father, Steven Backus.

The bride is the daughter of Penny Kellogg and Brian Hartigan of Randolph, and Steven Backus of Randolph. She is a graduate of Randolph Union High School and Vermont Technical College. She is employed at Hairmasters Salon in Essex Junction, and Central Vermont Medical Center in Berlin.

The couple recently purchased a home in Barre Town.