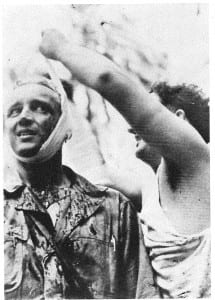 George Aiken was succeeded in the State House by William Wills, and then in 1944 by the last of the Proctors, Mortimer. In 1946, Proctor was challenged by Ernest Gibson, Jr. Gibson was just back from World War II, where he had fought with distinction with the forty-third Division commanded by General Leonard Wing of Rutland.

Gibson attacked Proctor for his “Old Guard” connections, called his administration a “study in still life,” and asked Vermont voters to break the “rule of succession,” which since 1930 had allowed the lieutenant governor to succeed to the governorship. He charged that a relatively small clique of people chose governors nearly ten years in advance, “supporting them up a series of political steps to the highest office.”

Although Proctor had the advantage of incumbency, Gibson won the primary by 8,000 votes and easily won the general election. During his first term in office, governmental services in the areas of education, health, welfare and highways were greatly increased. Interestingly, he felt the greatest problem facing his administration was “equalizing educational opportunity and distributing the costs as equally as possible among the towns and school districts of the state.”

Gibson asked for what was then the highest budget in Vermont history, $31 million. To raise the necessary funds, he pushed for and won an increase in the state income tax. Gibson turned back a chal-lenge from his lieutenant governor, Lee Emerson, in 1948, and served until 1950, when he resigned to become a federal district judge.

Gibsons have continued to hold state and national political offices. Ernest Gibson, Jr.’s eldest son, Ernest III, served in the Vermont House, was appointed public service commissioner by Governor Philip Hoff, and served as a supreme court judge. Another son, Robert, served as secretary of the Vermont Senate from 1963 to 1999, and the youngest son, David, has been a state’s attorney from Wind-ham County and a state senator.