‘Stages in the Sun’ Set for Vermont Outdoor Summer Fun 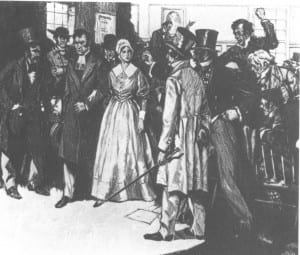 CAPTION: Quaker woman protects Reverend Samuel J. May at an anti-slavery meeting in Montpelier in 1835.

The Whigs occupied the statehouse for almost twenty years beginning with Silas Jenison in 1835, with the Democrats winning only one election, in 1853. In addition to the Whigs, Democrats and Anti-Masons, a splinter party had come upon the Vermont political scene. The Liberty party grew out of the organized anti-slavery movement in the state, which had begun with the founding in Middlebury of an Anti-Slavery Society in 1834.

The society, in its first annual report, declared, “We therefore proclaim war with slavery, our weapon is truth – our basis, justice – our incentive, humanity – our force, moral power – our watchword, onward – our hope of success, in God.” Abolitionist speakers were met with resistance, in some cases. In 1835 anti-slavery lectures by Samuel May were broken up in Montpelier and Rutland.

During the late 1830s, abolitionist petitions poured into the United States Congress. Most of the petitions related to the existence of slavery in the District of Columbia, and the domestic slave trade. As a result, a “gag rule” was adopted by Congress that required that petitions on the subject of slavery be laid on the table without action.

Congressman William Slade, who had received many such petitions from his constituents in Vermont, rose to address the U.S. House of Representatives and said:

“We must not bury these petitions. And let me way to you gentlemen, that such a policy will certainly defeat itself. You cannot smother investigation of this subject. The spirit of free inquiry is the master spirit of the age.”

What Gen Z knows - and should learn - about saving for college