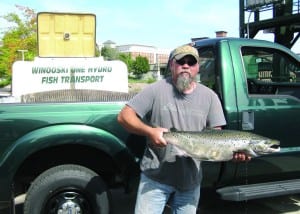 Vermont anglers have something new to smile about. Strong spawning runs of landlocked Atlantic salmon from Lake Champlain have been returning to the Winooski River in the fall. The runs are monitored annually at the Winooski River fish lift, the main feature of a trap and truck fish passage project built into the Winooski One hydroelectric facility above the Salmon Hole in Winooski. The last few years have seen the highest numbers of salmon in the fish lift since the facility opened in 1993. Biologists are hoping that trend continues this fall.

“I think we’ve really turned the corner in Lake Champlain salmon restoration,” said Nick Staats, a U.S. Fish and Wildlife Service fishery biologist who is monitoring the salmon run in cooperation with the Vermont Fish and Wildlife Department. “In the last few years not only has the number of returning salmon increased but the size of these salmon has also increased. Just last week we handled a 32-inch, 14-pound male salmon, which would be a new state record.”

“Burlington Electric is proud to be part of the salmon restoration program in Lake Champlain,” said Neale Lunderville, Interim General Manager of Burlington Electric Department (BED), which recently purchased the hydroelectric station from the Winooski One Partnership. “Helping the salmon population grow and thrive in the lake is a rewarding part of our ongoing environmental mission at BED.”

“Winooski One and Green Mountain Power have been excellent partners in the fish passage program,” Staats added. “I look forward to working with Burlington Electric.”

More salmon means more fishing opportunities for the public as well. Salmon captured at Winooski One will be transported and released above the dam on the Winooski River. Salmon will have access to the upper Winooski and its tributaries from the Essex 19 dam, near the five-corners in Essex Junction, upstream 23 miles to the Bolton Dam. Anglers are allowed a daily limit of 2 salmon with a minimum length of 15 inches. Steelhead rainbow trout captured at the fish lift will be released between the Winooski One and Essex 19 dams.

The increasing salmon returns are testament to the cooperative efforts of the Vermont Fish & Wildlife Department, New York Department of Environmental Conservation, and U.S. Fish and Wildlife Service to restore this native fish to Lake Champlain. Aggressive sea lamprey control and ongoing stocking efforts are central to the success of the restoration program.

“We’ve had dramatic declines in sea lamprey wounding rates over the past several years, which are resulting in improved survival and growth of salmon and trout stocked in Lake Champlain,” said Brian Chipman, a Vermont Fish & Wildlife Department fisheries biologist. “Anglers have been reporting excellent salmon fishing in the lake, and those fishing opportunities will be extended up the Winooski River.”