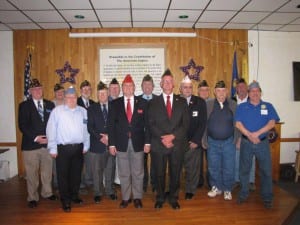 Commander Dellinger visited with members of the Legion and Sons of The American Legion, and members of the American Legion Auxiliary, and complemented the groups on their support of Veterans and their families and the community. In his one-year term, each National Commander represents the interests of all Veterans in meetings with the Executive Branch and testimony before Congress, and visits Legion Posts in all 50 states and several other countries.

Locally, Commander Dellinger met with Lieutenant Governor Phil Scott and residents and staff at The Veterans’ Place in Northfield.