by vt-world
in Local News, Senior
0 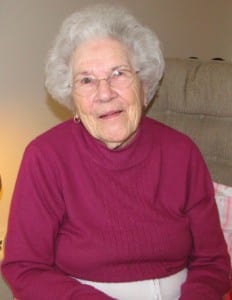 Alba Rossi of Barre turned 100 years old this past Monday, Oct. 17, and without a doubt to all those who know her, she is truly a “super centurian.”

She enjoys a keen mind, good hearing and looks like someone at least 20 years younger. Alba says she has no secrets for successful longevity but admits her many years of bookkeeping at the former Rossi Trucking Co., starting in 1941 at age 25, probably had something to do with her sharp mental discipline.

“When I started working for them we didn’t have fancy calculators or computers-everything was done by hand and figured out in our head. Now when I have trouble remembering someone’s name, I go through the alphabet until it comes to me. I do have a problem with macular degeneration that affects my eyesight somewhat,” she explains.

Alba now lives in her own apartment at The Lincoln House in Barre.

“This place is excellent! The food is tremendous and I’ve gained 14 pounds since coming here. I’m going to have to learn to say NO to some of the choices,” she said.

Alba was born in South Ryegate in 1916, the middle of six children (and the only surviving sibling today), born to Aurora and Ezio Benedini who had immigrated from Carrara, Italy. The family moved to Barre in Alba’s early childhood.

Alba attended the North Barre Graded School and graduated from Spaulding High School in 1934. The graduation ceremony was at the old Barre Opera House and the guest speaker was the Commissioner of Immigration for the United States, Ugo Carusi. (Ironically, his sister Iole later became a resident of The Lincoln House and lived to be 105).

In 1940, Alba married Theodore Nicholas Rossi and they had two boys—Theodore Allen of Santa Barbra, Calif. and Stowe, Vt., and William Lawrence of Joe’s Pond in West Danville. The two boys and their spouses threw a big party for Alba last Sunday at the Capitol Plaza in Montpelier with 27 friends in attendance.

Alba and her husband were married for 50 years until his passing in 1990. They had made their home for many years on the Barre-Montpelier Road. After 63 years, Alba moved back to Barre on Orange Street and has many wonderful memories there. She can still remember all of the neighborhood children’s names like you would expect from a retired school teacher.

Alba Rossi considers herself a “true Vermonter” because her whole life has been centered here in the greater Barre area. She really is a treasure of knowledge and warmth for all of us to enjoy.

No Retirement Plan at Work? Tips for 2016 Open Enrollment Season