Special to THE WORLD: From the Vermont Rotary Club 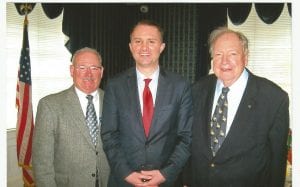 Vermont Attorney General TJ Donovan, now in his second term, told the Montpelier Rotary Club at their weekly meeting Monday March 11 that his best qualification for the job was his experience growing up in Burlington’s South End was working at a local market, the likes of which no longer exists. “It was truly a community gathering place. [There were] rules for the workers—treat the customers with respect and the customer is always right.”

The Attorney General’s job, he said, is to enforce the law. “What can we do for you? First, translate the laws and put the information up on the website. Second, make sure to have an open line to small businesses from which we receive 13,000 calls per year.” Donovan added that his goal is to make sure the callers “speak to a live person who can put them in touch with someone who can answer their question and believe in the goodness of people.”

Donovan feels that Vermont hasn’t figured out its identity in the 21st century. “The demographics are not good—young people are leaving.” Donovan visited Ireland 20 years ago to learn how the European Union regulated business and personal data. “Things were not good; the country was financially depressed. When I went back last May, I found the country was transformed! They have a booming economy with lots of diversity. I wondered, ‘why not Vermont?’ Amazon just put their European headquarters in Dublin, and I realized that the difference is that [in Ireland] “differences“ are being used to bring people together.” Donovan said.

According to Donovan, Vermont needs to remain technologically competitive. He stressed the importance of teaching kids how to code and referred to the importance of artificial intelligence. 20 years ago, Gov. Howard Dean lamented that broadband implementation could leave the state behind – or help it grow. Donovan feels that similar challenges face Vermont children as they pursue a modern education.

When questioned about the viability of the American dream, Donovan worried that the next generation may not have the same opportunities he had. “Are we willing to invest in our public education?” He asked. “We need to teach children this is a technological, global, digital job. To transform this state we need to believe in our state and ourselves. We are now at a crossroad of diversity, opportunity and growth.”

As The World covered last week, Donovan’s office is trying to tackle the nationwide problem of scam robocalls. Enforcement of programs to combat robocalls has proven to be elusive. “There are as many as 4 million of these calls per month.” Donovan said. “How do they get our numbers? Vermonters have a right to know who is dealing with the data in this state. California passed a bill based on the General Data Protection Regulation.”

On the subject of immigration, Montpelier Rotarian Bill Miles said it takes a lot to become indignant to the point of speaking out and doing something, but a recent report of ICE agents stopping people, even whole busses, on the highway and asking people to show them their papers of where they came from was very upsetting to him. Donovan agreed noting that Vermont farms have many migrant workers. “It’s a hotly debated issue for sure,” he said.