Abraham Lincoln and the Rise of the Republican Party

Abraham Lincoln and the Rise of the Republican Party 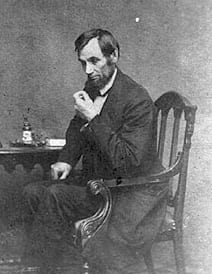 The time was ripe for the rise of a new party that would gather under one stand the disaffected members of the various established parties. The Republican party in Vermont was organized on July 13, 1854, when about 600 to 800 people gathered at the State House in Montpelier.

A person who played an important role in the creation of the new party was the crusading editor of the Vermont Watchman, Ezekiel P. Walton. In June of 1854, Walton editorially called for a mass state convention. Invited were “all persons who are in favor of resisting… the usurpations of the propagandists of Slavery.”

The convention agreed to call their new party Republican. The Republican platform stated unequivocally: “Our rallying cry shall henceforth be the repeal of the Fugitive Slave Law…, the abolition of slavery in the District of Columbia, the prohibition of slavery in all the Territories of the United States, and the admission of no more slave states into the Union.”

The new Republican party spread quickly throughout the North. In 1855 a Republican was elected speaker of the U. S. House. And in 1856, Republicans ran their first presidential candidate, John Fremont. He lost to the Democrat, James Buchanan, but in 1860 the GOP took over the White House with Abraham Lincoln and stayed there until 1888.

The depth of Vermont’s concern for abolition was no better expressed than in a report by a committee of the Vermont Senate in 1855: “Born of a resistance to arbitrary power – her first breath that of freedom – her first voice a declaration of equal rights of man – how could her people be otherwise than haters of slavery – how can they do less than sympathize with every human being and every community which asserts the rights of all men to blessings like their own?”

Vermont’s resistance to the concept of slavery, from the constitution of 1777 to the formation of the Republican party, shaped the state’s commitment to the Civil War.

“In the course of the war, Vermont had 34,328 men under arms, mostly volunteers. That was more than twice the number of Vermonters who fought in World War I. Vermont had a greater proportion of her men killed in battle than any other northern state. Her troops were the first to entrench on Confederate soil, and the first to attack Confederate fortifications. This was an extraordinary record for a small, rural state.” An oft-quoted order by a Union general to “Put the Vermonters ahead and keep the column well closed up” seemed to summarize Vermont soldiers’ strength in battle. The order came during the first day of the Battle of Gettysburg on July 1, 1863. THe New York Times wrote, two days later, “A Vermont brigade held the key of the position at Gettysburg and did more than any other body of men to gain the triumph which decided the fate of the Rebellion.”