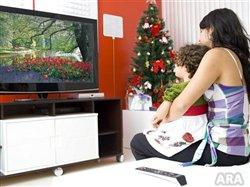 If someone on your gift list this year loves to watch TV and wants to see all the top-rated shows for free – there’s a gift out there that can grant them their wish and won’t break the bank. It’s a razor thin, indoor, high-tech HDTV antenna that pulls in all TV broadcast signals within 25 miles and makes them available in 1080p high definition, the best picture quality currently available.

Known as the FlatWave, part of its appeal is that it’s very lightweight, hooks up in less than two minutes to your TV and is designed to look more like a decorative item in the home. It can lay flat on furniture or cling to a wall or window to get the best reception.

It is available online through Amazon and Winegard Company for less than $ 40 and is available at Costco stores nationwide, and soon will be available at other major retailers in time for the holidays.

This technology means free TV from all the major local broadcast networks, such as ABC, CBS, NBC, FOX and PBS, plus additional networks like Qubo, ION, The CW, Universal Sports and many more. It also includes some 24-hour news networks and sports channels, as well as 24-hour music, children’s, classic movie, travel and dining networks.

With the average cable and satellite monthly bills running around $ 70 and steadily rising, millions of TV viewers are looking for some relief. This is a gift that definitely can save money while delivering a high quality HDTV picture.

“I don’t have cable, but I receive 18 unique channels and know for a fact that some people with traditional antennas don’t even know about some channels that are available,” says Brett Thebeau, who works in the construction industry. “My HD reception is near flawless with this antenna.”

Americans are watching more TV than ever before and the development of brilliant flat screen sets and high-definition TV (HDTV) have greatly enhanced the viewer’s experience. In nearly 143 million U.S. TV households, the average American spends about five hours a day watching television, according to Nielsen.

Your gift recipient can get rid of cable or satellite altogether, or reduce the number of boxes needed. One money-saving solution is to embrace new, inexpensive high-tech antenna technology like the FlatWave, which makes a broader range of free TV reception possible.

Made in the U.S.A., this is a great complement to an existing TV system, since it can receive programs satellite or cable packages may not offer, such as local TV channels.

Now, anyone can give a gift that promises brilliantly clear, free over-the-air channels for your recipient.

Advice for families coping with an older driver's changing abilities

Advice for families coping with an older driver's changing abilities