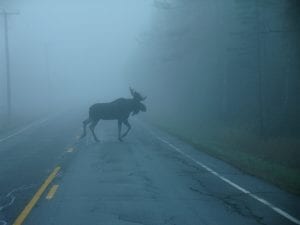 Drivers need to be alert and cautious because moose are on the move, according to the Vermont Fish & Wildlife Department.  Moose are more likely to be crossing roadways at this time of year, especially after dark or early in the morning as they move from wintering areas to spring feeding locations.

More moose are hit by motorists in the spring than at any other time of the year.  There is another peak of activity in September and October, the breeding season for moose.

“Motorists hit 61 moose on Vermont highways during 2018,” said Fish & Wildlife Commissioner Louis Porter.  “We are asking drivers to be especially careful and for people to enjoy watching moose from a distance.  Moose can be unpredictable and dangerous if you get too close and they feel cornered or get irritated.”

Moose are a threat to motorists, but there are measures you can take to avoid hitting them, according to Fish & Wildlife:

Always be aware of the danger — moose cross the road randomly, as well as at their regular crossings.

Increase your roadside awareness and reduce your speed when you see MOOSE CROSSING signs along the highway.  When on secondary roads, the recommended speed is 40 mph or less in these moose crossing areas.

Drive defensively and don’t overdrive your headlights.  Moose are more active at night and early morning, and they are difficult to see because of their dark color.

If you see a moose ahead, slow down or stop.  Trying to speed past them before they can move can be a serious mistake.

-Rt.105 from Island Pond to Bloomfield.

-Interstate 89 from Bolton to Montpelier.

-Rt 118 near Belvidere Corners and the Rt. 109 intersection.

Nineteen people have died in motor vehicle collisions with moose on Vermont highways since 1985.