Bernie’s Mitten Merchandise Offers A Pathway Out of Poverty

Enjoy the 2021 Maple Season, Even Without Maple Open House Weekend 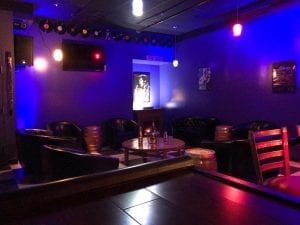 “The slogan,” Connor Mears says, “is Vermont’s premier night club.” He is sitting in what he calls the cocktail lounge or whiskey room of his new business, Mingle Nightclub. Framed pictures of famous musicians spanning several genres of music decorate the deep purple walls. The furniture, which is black and comfy, is arranged in a way that allows for more one-on-one conversations. A fireplace adds a kind of primal coziness.

Mears, who grew up in Barre, has returned to open and run Mingle Nightclub with his father, Scott Mears, who also lives in the area. Mears, who brings with him skills in management and an appreciation of nightclubs, also brings a desire to participate in what he calls with a laugh, a Barre renaissance. Things are beginning to look better than how he remembered them when he was growing up here, and in October of 2017, he signed a lease on the old Aubuchon building in hopes of continue that growth by taking the vacancy off of Main Street.

Mears has been to a lot of clubs in his travels and prior to signing the lease, realized that Barre really doesn’t have anything like a nightclub. At least not yet. It’s “not just youth, but all ages,” he explains. “There are other great places here, but I am trying to create something new.” 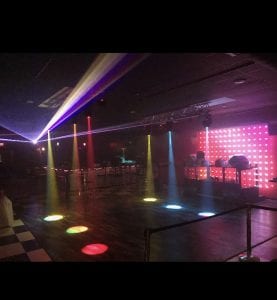 New meaning “we will be bringing in music from throughout Vermont and neighboring states,” Mears continues. They plan to have a wide variety of genres and, on top of having local bands, they hope to attract bands who have yet to perform in Barre. One example that he gives is that there will be rock n’ roll night on one weekend, and maybe a top 40 the next. Maybe one night will host classic rap and the next, jazz.

“The market will dictate it, Mears explains. “If people want a country night, we’ll have one of those too.”

Mingle Nightclub also hopes to set itself apart from other bars and nightlife scenes in that it has a light show, something Mears wanted from the beginning.

“When you spend time in clubs, the light show works hand-in-hand with the music,” he explains.

It wasn’t until Mears installed the lights and found someone to work them in with the music did he really respect them. “The light show is correlated with the song. As a beat builds, the lights flicker. It’s a real show. Not just stagnant.” Mears believes that the whole experience, the lights, the fog and lasers, will put people in a real club atmosphere. And he hopes to get people to even travel into Barre for it.

Mingle Nightclub will also have food. During the day, the space will be family-friendly, where folks can grab dinner. Mears believes that there are “A lot of really good places to eat in Barre. I’m not competing with them. Ideally, I’m promoting the local business around here. You can go out, get your meal, then come here and dance.”

However, he makes sure to draw attention to that fact that they will also have “really good food. Light fare. Cheese plates, charcuterie, fries, cold cuts, a panini press, etc.” Fifteen items in fifteen minutes or less is the generally idea. He also wants to promote late-night food. “There really is not a late-night place to get food. People want to eat late at night when they leave. If it’s 11:30, midnight, and someone comes and wants something to eat, we’ll have food.”

Mears hopes to have something for everyone. Mingle Nightclub has fifteen taps, meaning they will offer fifteen different beers. Many of these will be domestic, or, what Mears calls “garage beers.” The others will be Vermont craft beers. There will also be wine, priced at three different points.

And then there’s the spirits. There will be bottle service in addition to well drinks, plus a three-tier liquor wall.

Overall, Mingle Nightclub will be what its customers make it to be. It’s set up both to accommodate folks who wish to dance and for those seeking to grab a cocktail and chat by the fireplace. It will also cater to folks thinking about wedding events or planning social gatherings.

To stay informed on upcoming events, follow them on Facebook at Mingle Nightclub. Currently, Mears is aiming for a grand opening on April 27th & April 28th. Don’t forget to stop by and mingle.