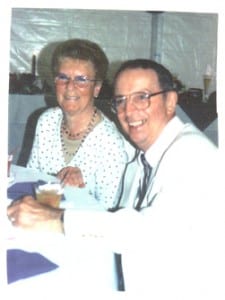 Andrew (Andy) R. and Eleanor D. (McEleany) Crete were married January 28, 1956 at St. Sylvester Church in Graniteville, VT. They have lived in Barre Town ever since.

Andy worked at Rock of Ages Quarry and later the quarry office for over 20 years. He also worked at various hotel resorts in the White Mountains in New Hampshire.

Eleanor was born and also worked in Dorchester, Mass., before working in the White Mountains, where the two of them met before marrying.

Andy and Ellie owned and operated a D.J. company named Supermusic and Company for nearly 25 years. They both love music. Andy was also a bookkeeper and tax preparer for many years, and now both are retired.

They still love travelling in New England and Canada and enjoy throwing a house party and their kids, grandchildren and family.