Vermonters Are Challenged to Clean Every Mile On Green Up Day

Youth Lobby’s Rally for the Planet Returns to Montpelier 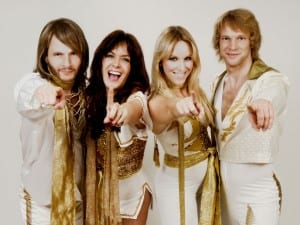 The Celebration Series opens on October 10th with a performance by the world’s foremost ABBA tribute show, Arrival From Sweden.

The TD Bank Celebration Series, presented by the Barre Opera House, marks its 31st anniversary this year and, as in the past, organizers have assembled an eclectic lineup of well-known acts with a bit of something for everyone.

Leading off on October 10 at 8 p.m. is the world’s foremost ABBA tribute show, Arrival From Sweden, which regularly sells out its summer shows at Red Rocks Amphitheater, Wolf Trap and other venues all over the world. The 11-piece band (which includes some of the original members of ABBA and is the only tribute touring with ABBA’s blessing) will take you back to the ‘70s as they re-create pop music’s most successful group. Authentic costumes, entrancing dance numbers and impeccable harmonies all come together to create the ABBA experience, live on stage.

Next, on October 19 at 7 p.m. is folk icon Arlo Guthrie. Born with a guitar in one hand and a harmonica in the other, the eldest son of America’s most beloved singer/writer/philosopher, Woody Guthrie, performs a night of inspiring music accompanied by heartwarming storytelling. With his exceptional and renowned solo skills, Arlo proves that the folk tradition his father helped create is still alive and well.

Standup comedian Steven Wright’s career has spanned over 30 years. He first performed in 1979, debuted on The Tonight Show in 1982, and forged a prolific career out of his unique brand of deadpan observational humor and creative one-liners. The undisputed “king of the one-liner” has continued touring, starred in several specials and won an Academy Award for his 1998 short film, “The Appointments of Dennis Jennings.” He’s #23 on Comedy Central’s List of the Greatest Standup Comedians of All-Time. Wright visits The Barre Opera House on November 8 for an 8 p.m. show.

Ten albums and over twenty years into her music career, Shelby Lynne remains one of the most distinctive voices in popular music today. In 2000, Lynne won the best new artist Grammy, even though she was a decade plus into her career. She went on to launch her own label, Everso Records, on which she’s released several CDs, including her latest project—the gospel-tinged “Thanks.” Never one to go with the crowd, Shelby continues to stand apart from the mainstream music world with her feet firmly planted on the fertile ground where rock, country, and soul meet. Her Celebration Series appearance is on February 7 at 7:30 p.m.

The Opera House continues its tradition of profiling the finest groups from the Emerald Isle with traditional band FullSet on February 14, Valentine’s Day. Since the release of its debut album “Notes at Liberty,” the stellar young group which has garnered a slew of “Best New Irish Group” awards since its beginning four years ago, has received much critical acclaim and has been compared to supergroups such as Danu and Altan by the respected Irish Music Magazine. On February 13 FullSet will offer a 10 a.m. student matinee for local schools, and instrument workshops later in the day.

The 2014-15 season concludes on March 28 at 8 p.m. with bluegrass favorites, The Gibson Brothers, back by popular demand after their 2012 appearance here. Says Bluegrass Unlimited: “The brothers and the band have it all — lead vocals, brother-duet harmony, instrumental virtuosity, ensemble sensibilities and great original material.” In 2013, The International Bluegrass Music Association voted The Gibson Brothers Entertainers of the Year, and they also took home awards for Song of the Year and Songwriter of the Year (Eric Gibson). They’re nominated again this year in the Entertainers of the Year and Vocal Group of the Year categories.

Celebration Series tickets are available now. Call the Barre Opera House box office at 802-476-8188 or order online at www.barreoperahouse.org. Those wishing to come in person can stop by the box office Tuesday – Friday, noon to 5:30 p.m. and Saturday 9 a.m. to noon. Special discounts are available to students, seniors, people with disabilities and Opera House members.

For more info, visit www.barreoperahouse.org. Tickets are also on-sale for folk power-trio Red Molly (April 4); other BOH shows will be added as the year progresses.