Wonder Why Farm, a 235-head certified organic dairy operation in Cabot, Vermont, has been named the 2019 Vermont Dairy Farm of the Year.

Morgan and Jennifer Churchill were selected for this award for their overall excellence in dairying as well as their innovative ways to improve herd management and produce high-quality milk, including installing robotic milkers in a state-of-the-art freestall barn. 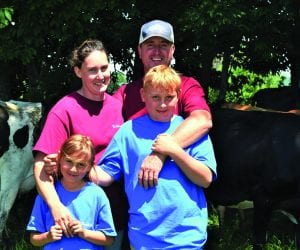 The couple bought the farm in 2012 from Morgan’s uncle, Walter Churchill, after leasing it for several years, transitioning the older, low-input farm into a high-level operation able to support a profitable, sustainable dairy. Two years prior to purchasing the farm, they remodeled the existing tie-stall barn to milk more cows. Although it was the right solution at that time, retrofitting the barn was not a viable option to accommodate the new milking system, which they installed in 2015.

They also wanted to be able to house all their animals under one roof, so they made the decision to construct a brand-new facility. With funding through a Dairy Improvement Grant from the Vermont Farm and Forest Viability Program and the Vermont Economic Development Authority, they built a new 24,000-sq.-ft. freestall barn for about $400,000, doing all but the steel framework themselves.

Each 4 x 8-ft. stall in the well-ventilated barn has sand bedding for cow comfort with bedded pack in the maternity area. To avoid overcrowding, 10 stalls are always left empty. The facility also houses the robotic milking system, providing easy access for the milkers.

The cows are fed round bales and 18 pounds of grain and two pounds of molasses a day in addition to free-choice sodium bicarbonate, minerals, salt and kelp for better hair condition. The farmers have 295 acres of hay, which provides about 60 percent of their herd’s needs, and 120 acres of pasture.

The Churchills also have a maple sugaring operation, producing an average of 700 gallons of syrup a year from their 400 buckets and 2,300 taps on pipeline. This year they planted four acres of hemp, which they will sell to a local buyer for oil.

University of Vermont Extension and the Vermont Dairy Industry Association present the award annually to an exemplary dairy farm. The winner is honored at an awards banquet at Eastern States Exposition in West Springfield, Massachusetts, in September, and at the VDIA banquet at the Vermont Farm Show in Essex Junction in January.