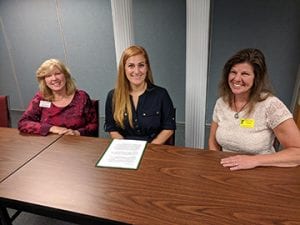 “We will be presenting two internationally recognized awards to recognize those who mentor women in business and helping them strive to attain their highest level of accomplishment and leadership from the state of Vermont,” stated Lyon.

The first award, The ATHENA Leadership Award® is a very prestigious recognition presented to a person who provides significant mentoring and direction to women professionals, noted Lyon. “This award honors individuals who strive toward the highest levels of personal and professional accomplishment, who excel in their chosen field, devote time and energy to their community in a meaningful way, and forge paths of leadership for women to follow.”

In order to receive the ATHENA Leadership Award®, according to Lyon, the nominee must meet the following criteria:

• Demonstrates excellence, creativity and initiative in their business or profession

The ATHENA Leadership Award® was inspired by the goddess of Greek mythology known for her strength, courage, wisdom and enlightenment—qualities embodied in the ATHENA Model. The Award is unique in both scope—local, national and international—and the ATHENA mission upon which it is based.

The second is The ATHENA Young Professional Leadership Award® recognizes women 40 years old and younger who meet each of the following criteria:

• Demonstrates excellence, creativity, and initiative in their business or profession

The ATHENA Young Professional Leadership Award® program was founded in 2007 by ATHENA International to honor emerging women leaders who demonstrate excellence, creativity and initiative in their business or profession. Recipients must also demonstrate their commitment to service by contributing time and energy to improve the quality of life for others in their community while serving as a role model for young women personally and professionally.

“The purpose of the ATHENA Award® is to develop, support and honor women leaders and those who inspire them to reach their full potential by offering unique, impactful leadership development and award programs,” believes Lyon.

The award recipients will be selected by a distinguished panel of judges:

Betsy Bishop of The Vermont Chamber;

The committee members who are working on this event include: