Following is the 2013 Town Meeting survey. Many of the questions on this year’s questionnaire relate to jobs and the economy such as state cell service and broadband, natural gas, the growing of hemp and locally grown food.

Additional questions include Vermont Yankee, use of cell phones while driving, decriminalization of marijuana, and a three-year moratorium on the construction of wind turbines.

Other questions on the survey are related to expanding the bottle deposit law, increasing the gas tax for roads and bridges, sugar sweetened beverages, the use of tasers, and alternatives for non-violent offenders. 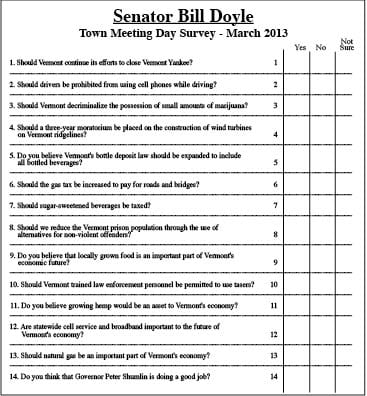 Senator Bill Doyle serves on the Senate Education Committee and Senate Economic Affairs Committee, and is the Senate Minority Leader. He teaches government history at Johnson State College. He can be reached at 186 Murray Road, Montpelier

Heroes that we present to our children